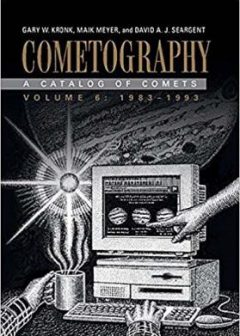 This is the sixth and final volume of a monumental set which started with Volume 1 in 1999. Cometography provides the definitive reference for every comet ever recorded from the ground that can be dated reasonably accurately, and it is a key resource for anyone interested in these fascinating objects.

The series was supported by the late Brian Marsden. The first four volumes were written single-handedly by Gary Kronk, but he was joined by Mike Meyer for Vol. 5 and David Seargent for Vol. 6. In total there are over 4,000 pages of descriptive text and, other than the front covers, no illustrations. Orbital elements, if known, are given for each object along with a description of the discovery or recovery circumstances. For brighter objects the descriptions are often engrossing and this is one of those resources where you can start by intending to look up details on one object but end up reading about a completely different one.

Vol. 1 starts with a description of a comet seen from Assyria in -674 October and Vol. 6 ends with C/1993 Y1 (McNaught-Russell), last observed in 1994 October. Each volume in the set has covered a shorter period and Vol. 6, despite its 850 pages, only covers the 10 years from 1983-1993. Towards the end of this period the rate of comet discoveries increased massively as professional surveys became more efficient. The authors and publishers have decided that a printed book is no longer appropriate given this massive increase in faint comets, so Vol. 6 will be the last of the series.

A distinctive feature of the volumes is the beautiful drawing which adorns the front cover. These give a real sense of the astronomical environment corresponding to the date range of the volume. On a personal note I was a bit disappointed with the cover for Vol. 6 which shows a rendition of the Jupiter/SL9 impact and a personal computer. It does reflect the massive changes that were happening in astronomy in the early ’90s but it just seems out of place compared to the other covers. This is a very minor, and subjective, criticism of what is otherwise a fitting final volume to this work.

The comet observing community owes a huge debt of gratitude to the authors for this colossal work. The volumes are expensive but, if you are a comet devotee, you should do everything you can to get hold of them.

Nick James is Director of the Comet Section and Assistant Editor of The Astronomer magazine. He has been fascinated by comets since his first view of the ghostly IRAS–Araki–Alcock (C/1983 H1) in 1983 May.