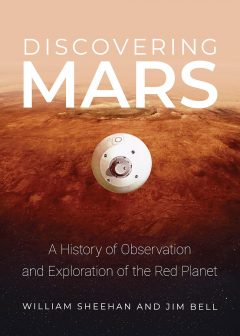 The appearance of this new book is timely given the flurry of spacecraft activity that occurred during the 2020 opposition, when three nations achieved success. Even more arrivals are scheduled for the near future. Subtitled A History of Observation and Exploration of the Red Planet, the book delivers a comprehensive review of our developing understanding of our neighbour world. Both authors have made numerous previous contributions to the field, and their cooperation in this volume enables the rich experiences of an historian and a professor of astronomy (with a specialisation in solar-system geology) to be effectively combined. The result is a work that is, in the words of the publisher, epic in scope.

We begin with a history of discovery via naked-eye observation, moving into the telescopic age by Chapter 3. For centuries, most discoveries were made during those perihelic approaches which were the best-placed in the opposition cycle for northern hemisphere observers, such as in 1845, 1862 and 1877. Coming at long intervals of 15 or 17 years, these oppositions always brought new personalities and discoveries with them. That of 1877 heralded the discovery of the Martian moons. There are full biographical details of the astronomers who made those discoveries possible, often accompanied by fascinating new insights. And there are some fine reproductions: I had not seen O. M. Mitchell’s old drawings of 1845 so nicely reproduced anywhere else.

In the course of the book, several previously mysterious phenomena are nicely discussed. For example, in Chapter 10 the aphelion cloud belt is mentioned. At the eyepiece without filters, we see only its east and west ends enhanced by oblique illumination, appearing as bright limb cloud. In the morning or evening, such cloud can cover the Syrtis Major (a low-albedo feature that crosses the equator) and cause it to look bluish: the so-called ‘Syrtis Blue Cloud’.

The seasonal ‘wave of darkening’ is also detailed. Here your reviewer should add that the seasonal darkening of albedo features near the poles – formerly thought to be due to meltwater soaking into the Martian soil – is the result of stronger winds blowing near the cap edge and lifting dust. It is also worth adding that apparent colour changes of the markings are partly real, for the presence of the aphelion cloud belt in parts of southern autumn/winter, and the higher levels of dust-storm activity in southern spring/summer, can together account for those changing contrasts reported by classic observers.

The Space Age begins in Chapter 11, and as with other topics it is thoroughly documented in a very readable manner. The rivalry between the rocket engineers of the USA and former USSR, as epitomised by von Braun (his Nazi background conveniently overlooked) and Korolev (formerly imprisoned in one of Stalin’s gulags), is detailed. Mars proved to be a difficult target; many craft have missed the target or failed to land safely, crashing into the ocean or even impacting the planet at high speed. The extraordinary success of the more recent ‘sky crane’ technique has enabled relatively heavy (and more adventurous) landing craft to be safely delivered.

Sheehan and Bell chart our slowly evolving ideas about the history of the planet. The first peeps from flyby space missions seemed to indicate a not-very-interesting world. But later missions revealed the great rift valley Valles Marineris and the giant volcanoes, while layered terrain and channels are indicative of past epochs of liquid water upon the surface. After more than a decade’s lull in exploration following the end of the Viking programme in the early 1980s, more nations have successfully launched spacecraft to Mars. The question of subsurface ice (or even water) is pertinent to future human exploration, as is mineralogical mapping.

Long gone are the days of the early 1960s, when it was still believed that infrared spectra provided evidence of chlorophyll. But more recently, the complex question of the as-yet unexplained traces of Martian methane has brought the life debate back to the fore. In Chapter 19, the authors think it too early to draw any definite conclusion, though they remind us that if atmospheric methane really exists it could have either a biological or geological origin. (Your reviewer remains a methane sceptic.)

The authors have avoided giving a purely chronological history of the many Mars missions, instead grouping some of them thematically. Thus Chapter 16 deals with mineral-mappers, and Chapter 19 with atmospheric explorers. By Chapter 21 we are up to the 2020s, with current and planned missions described. Figure 21.1 shows 47 missions from eight different nations or organisations, of which more than 40 percent have failed. We are reminded on page 543 that despite some apparent U-turns, ‘the long-term U.S. goal still remains getting humans to Mars’. As a first step, Perseverance has demonstrated that it really is possible to extract oxygen from the surface rocks.

The text is sprinkled with lots of black-and-white illustrations, while there is a good set of colour plates to illustrate telescopic drawings and numerous spacecraft images, ending with the little helicopter carried by Perseverance.

Many popular Mars books do not contain much useful tabulated information. This one is refreshingly different, with a number of very detailed and useful appendices. These include a complete mission chronology, and a list of acronyms (my favourite being RAT; MOLE and BADGER are sadly absent, but MOLA at least comes close). There are also lists of orbital characteristics, all the oppositions during 1901–2099, representative nomenclature, seasons, timekeeping, and financial investment in missions. These, together with extensive notes and references as well as an unusually comprehensive index, occupy over 150 pages at the book’s end. Given its easy style and modest price, this book is accessible to a wide audience. I can recommend Discovering Mars without hesitation.

The reviewer has written scientific reports upon all the oppositions of Mars for the BAA for the last four decades, from the end of the Viking mission to the era of Perseverance. He has also compiled a comprehensive narrative and catalogue of telescopic dust storms. When not writing planetary papers, he plays the oboe in two local orchestras.