Encyclopedia of the history of astronomy and astrophysics 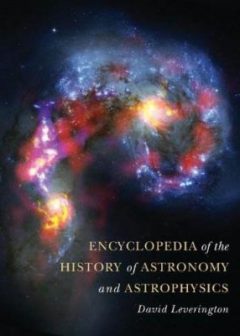 This very large, impressive volume covers the entire history of astronomy from pre-history to the present day, including a brief treatment of astronomy in many non-western cultures. It is aimed at the high end of the popular science market: the reader is assumed to have a basic knowledge of science and history, but no mathematics is used.

The author has a degree in physics and spent much of his working life as an official in the space industry, partly in the European Space Agency. His background shows in the book’s emphasis: while the title suggests a general history of astronomy and astrophysics, almost all the second half is concerned with modern-day observatories and space missions. Astronomy before the space age is almost entirely consigned to the first half, and even here there is much about modern developments.

The encyclopedia’s first half consists of a general overview of the whole history of astronomy, in chronological order, followed by the history of discoveries in the solar system, the stars and the extragalactic universe. The text is very readable and mostly free from factual or typographical errors. There are occasional anachronisms: for example, Carrington and Hodgson are credited with the 1859 discovery of ‘solar flares’ – not a term in use at the time. Some sections would have benefited from sub-headings instead of pages of solid text; this and some text boxes for special topics – such as a half-page article on the International Astronomical Union, bizarrely given an entire chapter to itself – would have made the book look and feel more like an encyclopedia. Each article has a useful, though short, bibliography of further reading at the end.

It is in the book’s second half, on Space Age astronomy, that the author is most comfortable with the material. Here we find crisp, concise accounts of the origins, history and scientific results of each major astronomical space mission or modern-day ground-based observatory, including radio observatories. If you want to understand the similarities and differences between, say, the Chandra and XMM-Newton X-ray space observatories, this is an ideal book to consult. The bibliographies in this section contain many more references to the latest books and technical papers.

The arrangement of the book as a whole into general astronomical history followed by specific observatories and space missions leads to occasional repetition and the text might have benefited from more cross-referencing between articles. But navigation is eased by no fewer than five indexes: as well as subjects and names of individual astronomers there are also indexes to optical observatories, radio observatories and spacecraft.
A great deal of solid research has gone into this volume, which offers a good, no-nonsense, factual reference on the history of astronomy. I recommend it particularly as a guide to modern space-based astronomy, on which Leverington has gathered much information that would be time-consuming to find elsewhere.

Deputy BAA Historical Section Director Lee Macdonald is currently based at Leeds University, where he is researching for a PhD on the history of Kew Observatory.