Exoplanets − hidden worlds and the quest for extraterrestrial life 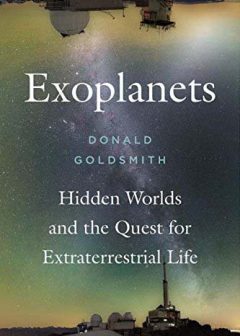 Donald Goldsmith is a member of the International Astronomical Union and President and owner of Interstellar Media. He has written several books on astronomical topics and has received awards for science communication and astronomical popularisation. The book describes the various methods of searching for exoplanets, e.g. radial velocity, transits, direct observation, orbital brightness modulation and gravitational microlen-sing.

Two methods tried unsuccessfully also get a mention – radio observations, and starlight polarisation. Reference is made to Earth-bound observatories and space telescopes, present and future, and their potential for finding and increasing our knowledge of exoplanets. The various categories of exoplanets and exosolar systems are described, plus how they differ from our home planet and solar system. The difficulties of journeying and communicating across the vast distances to the nearest exoplanets is covered in the final chapter.

The book’s sleeve states that ‘Earthlings with little background in astronomy or astrophysics can understand and enjoy (this book)’ but my view is that ‘little’ should be replaced by ‘some’ or in some cases ‘quite a bit’. As an example of the latter there is a quote by Carl Sagan ‘it is likely that the first self-replicating polynucleotides [on Earth] developed in the oceans, and were benthic rather than pelagic’. A dictionary or Google was very necessary at this point. The book is not an easy read, as there is little flow to the content. I am reminded of that now famous quote by comedian Eric Morecombe when accompanying, on the piano, an orchestra conducted by Andre Previn: ‘I’m playing all the right notes but not necessarily in the right order’. A more systematic approach starting with how planetary systems are formed, how exoplanetary systems compare with the solar system, how life develops and might have developed on worlds different from our own, followed by detection methods and future prospects might make for an easier read.

The title includes the words ‘the quest for extraterrestrial life’ but this topic gets little coverage being limited to a single chapter. The book could certainly be better illustrated. There are very few diagrams (but six lightcurves?) which are quite small, and not one single image of an exoplanet or diagram of an exosolar system. As you may have guessed by now I am not very impressed by this book. Two books on the subject that I would recommend are ‘How to find a habitable planet’ by James Kasting and ‘The hunt for alien life – a wider perspective’ by Peter Linde.

Roger Dymock has recently taken up the position of Assistant Director, Exoplanets – the newly formed Exoplanet Division being part of the Asteroids & Remote Planets Section. He is the author of Asteroids and dwarf planets and how to observe them and has been an active observer of asteroids and comets.