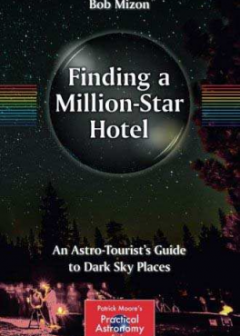 This is very much a book of two halves. The first has chapters on dark sky places and how to find them while the second is more of a general introductory text on astronomy, discussing topics such as what is in the sky (solar phenomena, selected stars, the Moon, short summaries about the planets etc.) and what equipment you need to see them. My concern is that the person who wishes to seek out the darkest skies is, in my experience, the more advanced observer, who doesn’t need to be told basic facts about telescopes and binoculars or how to find Polaris. For a book ostensibly about searching out dark sky places for night time observing, there is also a lot in it about the Sun. Good information is given on how to observe the Sun safely and there are many pages on future solar eclipses up to the year 2026, including Espenak NASA eclipse maps. The 2017 August 21 eclipse gets a special mention.

The real meat of the book is in the first 153 pages. After discussing definitions of a dark sky, e.g. the Bortle Scale, there are listings of dark sky areas in the UK (53 pages), the USA state by state (48 pages) and the rest of Europe (19 pages). These are well written, comprehensive and well supplied with web addresses for site information and accommodation. There is no detailed discussion of the southern hemisphere, other than mentioning that the Atacama Desert in Chile and parts of Australia have some of the darkest skies on Earth.

This series of books has a reputation for poorly reproduced photographs. The majority of illustrations have reproduced well here, although some will leave the reader hunting for the stars mentioned in the figure heading. Nine appendices are largely connected with dark sky/light pollution topics and provide a useful summary, but the Glossary of Astronomical Terms is limited and has one or two strange inclusions, e.g. Cinque Port. Also referencing of the appendices has gone astray. In the contents they are listed as A to I whereas in the text they can be given as either a numeral or an incorrect letter. For example, on page 15 Appendix 4 is referred to which is actually Appendix G and on page 180 Appendix C should be Appendix F.

The author is a well-known and knowledgeable writer and lecturer who has devoted many years to publicising issues associated with light pollution, and this book brings together much useful information. I just feel it would have been a better book if it had concentrated on these topics rather than also including material on general astronomy and eclipses.

Stewart is a visual observer with a particular interest in the deep sky. Until recently he was Director of the BAA Deep Sky Section. He can confirm the excellent quality of the sky from the top of La Palma.