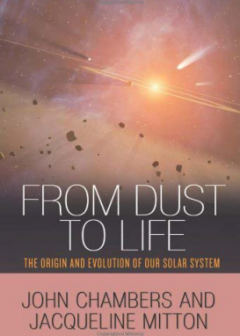 The origin of the solar system is amongst the great questions in astronomy, particularly as proto-planetary disks and planets have now been detected around other stars.

The current status of investigations into this question is covered in this new book by John Chambers and Jacqueline Mitton. Chambers is a planetary scientist at the Carnegie institute in the USA and Mitton is a well-known astronomy writer and former editor of this Journal.

The scope of the book is wide ranging, covering topics varying from the history of the exploration of our solar system, the birth of the universe, stellar evolution, and geology. However, the main focus of the book is on how the solar system as a whole and the individual solar system bodies may have formed and how they may have evolved to their current state.

Observations particularly from spacecraft have given clues to this process. Further, the use of computer models has allowed scientists to explore the effects of gravitational interactions and collisions between the evolving disk of dusk and gas and the subsequent solar system bodies, such as planets, comets and asteroids.

Such studies have indicated that the conglomeration of dust grains into larger bodies may be a difficult process and is not well understood. Further, such studies have shown that the solar system may have been more dynamic and different in the past than previously thought, with collisions and planetary migration each playing a role leading to the solar system we see today.

The subject of the origin and evolution of life on Earth is briefly addressed in a separate chapter.

Despite recent advances in this field, some areas still remain uncertain and this is highlighted in the main text and in the final chapter, which also provides a useful summary of the current understanding. The potential future of the solar system is also described.

The authors’ stated intention was to write a book for the general reader although in some places a little scientific knowledge does help. The book includes a useful glossary of terms and a list for further reading. The writing is generally clear although in one or two places some explanations are a little more difficult to follow. All illustrations and diagrams are in black and white but the reproduction of a few of these is rather dark. There are also a few minor errors such as in Table 12.1, where the ratios of the diameters of the giant planets relative to the Earth’s diameter are twice as large as they should be.

Despite these minor criticisms, I enjoyed reading this book and found that it gave an excellent overview of the current state of studies into the formation of the solar system.

Mike Foulkes is the Director of the BAA Saturn Section and works in the spacecraft industry.