Galactic encounters: Our majestic and evolving star-system, from the big bang to time’s end 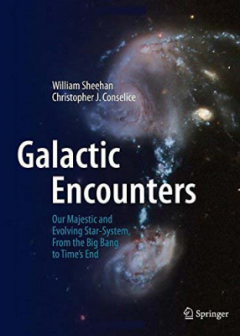 Galactic Encounters might be more correctly subtitled ‘a history of our exploration of the galaxies’, for it tells the story of our discovery of galaxies from Charles Messier’s eighteenth-century catalogue of fuzzy objects in the sky that he thought might be confused with comets, to modern-day findings, such as the discovery that the galaxies are flying apart at an accelerating rate due to an as-yet mysterious ‘dark energy’. The book is a partnership between a historian and a professional astronomer. William Sheehan, a medical doctor by profession, is a well-known historian of astronomy with several books to his credit, notably a highly-praised biography of Edward Emerson Barnard. Christopher Conselice is based at Nottingham University, where he specialises in galaxies and cosmology.

The book follows a roughly chronological timeline from the late eighteenth century to the present day. It might have been helpful to have set the scene with more about observations and speculations on the ‘nebulae’ before Messier.

But one of the book’s strengths is that, in addition to the oft-told stories of Messier, the Herschels and Hubble, we read of many lesser-known figures who made seminal contributions to our understanding of galaxies and how our own Milky Way relates to them.

For example, the authors describe how Lowell Observatory astronomer Vesto Slipher photographed the spectra of spiral nebulae – and thus discovered their rapid recession – by accident, because his autocratic boss Percival Lowell wanted to use them to test his theory that they were solar systems in the process of formation.

The text is aimed at the general reader, though there are plenty of references to scholarly sources for those who want to explore further. The authors occasionally go into too much background detail. For example, when leading up to Slipher’s discovery of the recession of spiral nebulae, they first devote many pages to the story of the illusory Martian canals and Venusian spokes. This is fascinating, but it feels somewhat out of place in a book about deep-sky astronomy and could have been summarised in a couple of paragraphs instead.

The text is accompanied by many fine illustrations, not only of astronomical objects but also of the personalities who made the discoveries. Some of them are quite rare – such as the group photograph of participants at the 1914 American Astronomical Society meeting that shows a young Edwin Hubble, not yet a graduate student, in a more prominent place than the then better-known Slipher. It is unfortunate that some of these are not reproduced to a larger size, especially given the book’s attractive large format.

All in all, Galactic Encounters is an excellent work that will appeal to everyone interested in the deep sky, as well as to historians of astronomy.

Lee Macdonald is deputy Director of the BAA Historical Section, and is currently based at the University of Leeds, where he is completing a PhD on the history of Kew Observatory in the nineteenth century.