Gerard P. Kuiper and the rise of modern planetary science 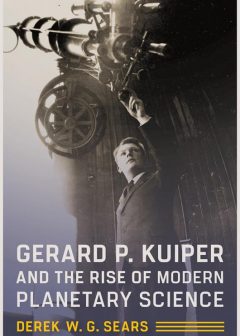 Gerard Kuiper (1905–1973) was one of the greatest, most controversial astronomers of the twentieth century and effectively the father of modern lunar and planetary science. His name is commemorated in the Kuiper Belt of comets, asteroids and planetisimals at the edge of our solar system, as well as by craters on the Moon, Mercury and Mars. Remarkably however, until now there has been no major biography of this influential figure.

Born in the Netherlands, Kuiper came to the USA in the 1930s, following a time when planetary science had been in decline among professionals after the excesses of Percival Lowell and his Martian canals. Initially Kuiper’s interests were in stellar astronomy, but he was eventually to carve out a distinctive niche for himself by rescuing solar system science from the doldrums and putting it on a thoroughly professional footing. This process culminated in the establishment of the Lunar and Planetary Laboratory at the University of Arizona in 1960.

His most significant achievements included the discovery of Uranus’ moon Miranda and the existence of an atmosphere on Titan, as well as the Moon-mapping project that facilitated the development of NASA’s programme of lunar missions during the 1960s. He was also an effective mover and shaker in the world of astronomy in the USA, pushing forward plans for new observatories and telescopes, including some of the earliest high-altitude observatories carried on aircraft.

Derek Sears was an academic at the University of Arkansas before taking up a position as a senior research scientist at NASA; this shows in the thoroughness of his treatment, which provides you with all the notes and references you are ever likely to need. But his account is not dry, even when dealing with the numerous academic plots and confrontations that seemed to accompany Kuiper during his career. Throughout the book he carefully illuminates not only Kuiper’s scientific achievements, but also his complex and often difficult personality.

This book will be of particular interest to members of the British Astronomical Association, for it devotes considerable attention to those amateurs from the BAA Lunar Section – Ewen Whitaker, Dai Arthur and Alan Lenham – who were recruited to Kuiper’s team in the 1950s, on the basis of the specific skills they had to offer and in spite of their lack of formal academic qualifications.

Sears’ book tells one of the great stories of twentieth century astronomy, and tells it remarkably well. I recommend it highly.

Bill Leatherbarrow is proud to be one of Ewen Whitaker’s successors as Director of the BAA Lunar Section. He also served as BAA President from 2011 to 2013.