Heart of Darkness: Unraveling the Mysteries of the Invisible Universe 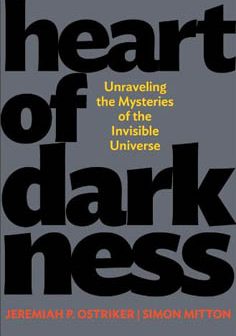 With a glossy black cover that suggests luxury chocolates, Heart of Darkness promises, and delivers, rich treats within. Histories of Astronomy are relatively plentiful: histories of Cosmology are rare. Even rarer are books such as this, that delight with their clarity and authority.

The authors use a chronological structure to describe the emergence of our current model of the Universe. Much more than this, they present the questions provoked, the theories developed, the evidence sought and found, (or, as importantly, not found), as cosmologists groped their way to the current big-bang model that includes both dark matter and dark energy.

This is a book of scientific argument. Arguing this way and that, following the missed insights, the discarded ideas returned to, and the evidence collected, Ostriker & Mitton show how dark matter and dark energy came to be accepted. Ostriker is, and has been, a participant in the discovery process while Mitton’s credentials as a philosopher and historian of science ensure a clarity that does them both credit.

Heart of Darkness is an account of scientific method in action over the course of more than a century. At the beginning of the 20th century, galaxies were still not recognised as ‘island universes’. Physics itself seemed to be reaching its completion. But relativity and the size and rapid expansion of the Universe led to new understandings that quickly became obsolete as new questions revealed new gaps.

Many Journal readers will recognise some of the story’s evolution over their own lifetimes and, as the cosmology of the 20th century becomes history, the agenda of new questions suggests that humankind is a very long way from completing the cosmological story.

There is no avoiding the fact that dark matter and dark energy are still mysterious to most amateur astronomers. Cosmologists too are puzzled. Dark matter and dark energy remain well-described ‘holes’ in human understanding. We know with some precision what is needed to fill these holes, but have no direct observations to enable us to do so. For the interested amateur astronomer however, armed with high school maths and the ability to follow a clear argument, this book is a delicious way to fill the gap.

Rosalind Armson is Editor of the BAA Handbook.