How to build a habitable planet 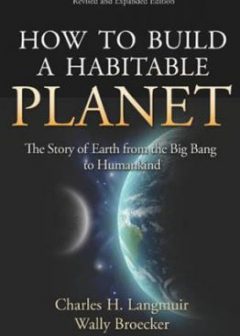 This is a flawed masterpiece, explaining modern thinking about a wide range of planetary science at a level that most BAA members should find accessible. Patience and concentration are required, because it is a long book dealing with complexly-interrelated matters. It is non-mathematical, but ability to read a graph would be useful.

But be warned: don’t buy it in the expectation that it is a book focusing on other planets, still less exoplanets (which are given only a few pages in the final chapter). Its scope ranges from the origins of the elements to the habitability of the Universe, but the bulk of the book is a treatise on how the Earth formed and evolved, and how the Earth operates as a system with life both controlling and controlled by chemical and physical conditions. To understand this is to understand what it takes for any other planet to be habitable.

Helpfully in view of such diverse and rapidly-advancing fields, the authors have views on the soundness of the numerous theories on which their descriptions depend. For example, the giant impact hypothesis for the Moon’s origin merits 5 or 6 on their 10-point scale, whereas the plate tectonics description of how the outer layers of the Earth move merits a ‘perfect 10’.

Each chapter is prefaced with an abstract and ends with a summary. As well as being useful aids to comprehension, you could use these to ‘fast forward’ yourself to the chapters that most interest you.

Inevitably in such an extensive tome, there are errors and imperfections. For example Bode’s Law is presented on p.116 as a description of the systematic progression of planetary orbital radii outwards from the Sun, but there is no discussion of how this relates to modern theories of orbital migration, or to the observed orbits of exoplanetary systems. Perhaps this is inherited from the previous (1984) version of the book (authored solo by Broeker), and escaped revision. The index claims that Bode’s Law is also on p.658, but it isn’t.

I was mystified to to read on p.233 that lunar mare basalts contain no plagioclase; the truth is that Apollo mare basalt samples contain between 5 and 48% of that mineral. Irish and Scottish readers might be irked to find Lord Kelvin (who was born in Belfast, and worked in Glasgow) described (p.146) as English, and astronomers of all nationalities may wonder why Figure 5-2, comparing planetary sizes, shows Saturn accompanied by eleven satellites but Jupiter by only three. Carelessly, the Drake equation, laid out on p.661, includes the same term twice and uses notation that is inconsistent with the text on the following page.

In summary, this is a book that is (very) good in parts, though marred by errors likely to mislead or confuse the unwary reader.