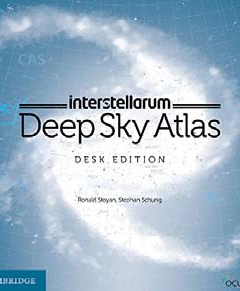 In the last four decades amateur astronomers have been blessed with a series of excellent sky atlases, many based on the superb celestial cartography of Wil Tirion. These ranged from the very affordable (Sky & Telescope’s Pocket Star Atlas, 2006) to the rather extravagant (the Millennium Star Atlas of 1997) so most pockets and needs have been well catered for. We also now benefit from several electronic atlases which can be very flexible, homing in on desired quarry of most magnitudes available to even the best equipped amateur observer. So is there a need for yet another paper-based atlas? With this beautifully produced Interstellarum Deep Sky Atlas, the answer is ‘yes’.

The Atlas has been specifically aimed at the flourishing Deep Sky observing community and definitely has a place on the desk of the active observer. Ronald Stoyan has been instrumental in producing several splendid volumes in conjunction with Cambridge. His Atlas of the Messier Objects (with Binnewies, Friedrich & Schroeder) is the definitive work on this famous catalogue, and his Cambridge Photographic Star Atlas (with Mellinger) is much admired.

The Interstellarum atlas was developed in Germany over many years from German-based observations and from Eye and Telescope, a software tool developed by Thomas Pfleger to assess the visual perceptibility of Deep Sky objects. One of this Atlas’s many strengths is that it indicates the visibility of the very many Deep Sky objects for different aperture telescopes. It does so by fading the saturation of the symbols, hence suggesting the difficulty. It cannot of course account for different sky conditions!

The Atlas is detailed but uses very comfortable scaling on its main pages and also in the more detailed additional maps at the end. It is very easy to navigate, moving from East to West on each double page spread. In the main body of the Atlas, stars are shown to magnitude 9.5. In the most detailed additional charts, the magnitude limit is 11.

I particularly like the inclusion of many dark nebulae, not often found in other atlases. I also feel that the approximate separation and position angle of many double stars should help enthusiasts of these often challenging targets. Many stars with known exoplanetary systems are also shown.

The more detailed charts at the end of the Atlas are varied and useful. The Virgo Cluster north and south are shown, as are the Magellanic Clouds. Eta Carina and busy areas such as in Cygnus and Scorpius are included. It was good to see several Abell galaxy clusters shown in detail.

A valuable index of a huge number of Deep Sky objects ends the Atlas, arranged by type. So it becomes very easy to locate, for example, a Hickson galaxy group. Super!

The Atlas is printed on quality paper and is a very manageable size. Being ring-bound, it opens flat. It is a desk edition so is not really intended to be waterproof, and I feel that it may not fare that well under dank UK skies (there is a field edition but it is considerably more expensive). But it is superbly fit for purpose.

Any negatives? Nothing serious that I can find. One potential source of annoyance to some users may be the adoption of some nicknames of Deep Sky objects that are not currently mainstream. While we have the very familiar ‘Ring nebula’ and ‘Sombrero galaxy’ for example, what are we to make of ‘Patrick Starfish’ (NGC 1245)? The mind boggles. Some observers will perhaps enjoy the inclusion of many of Stephen James O’Meara’s monikers; others will find them an irritation.

Overall, this is a splendid and affordable atlas that will be treasured by Deep Sky observers for many years.

Dr Nick Hewitt is currently a Vice-President of the BAA and a former Director of the Deep Sky Section.