Introducing the planets and their moons 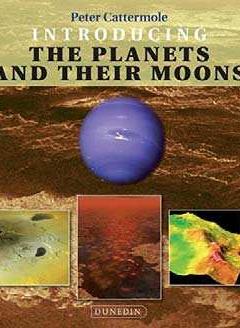 On receiving this book to review, my instant thought as I unpacked it was that it was a book for children. On looking through it was apparent that this was definitely not the case, and in fact the first person to actually start to read it was not myself but my wife! I think the reason for this is that it looks an engaging book to read.

The book is one of an introductory series by Dunedin; others in the series being Geology and Oceanography for example. The books, according to the rubric received, ‘are written as sound introductions to their subject for adults.’ Peter Cattermole, a geologist by training, will be well-known to many members reading this. At 142 small pages it is not a large book, but it is lavishly colour illustrated and has a glossary, with suggested further reading but no index.

The author states in the preface, ‘This book is an introduction to current ideas about the planets and their moons. It is not an exhaustive treatment; this would require a far longer book.’

I would not consider this as a beginner’s guide to the solar system. In fact it is not a guide to the solar system in the conventional sense, but its geology and associated phenomena. It is for the already interested reader with some previous knowledge of the subject. Glossary terms are in bold text and I found that I did have to refer to some of the terms for more explanation.

The first three chapters give an overview of how the planets in their orbits within the solar system are thought to have formed. The next three chapters recount topics such as planetary differentiation, magnetic fields and atmospheres. The following two are on the geological development and volcanism of the inner planets, and our Moon is given a whole chapter. The final three chapters cover the outer planets.

The coverage of these topics is thorough and, as mentioned earlier, requires the reader to have some grounding in the basic facts already. Not being a geologist, I cannot comment on the accuracy of much of the information, but it is evident that the author knows his subject and his reputation goes before him.

I am happy to recommend the book to members of the BAA, with the caveats as mentioned above. It is a readable book on current geological theories about the solar system, written by a geologist. The title does suggest it is for beginners, i.e. an introduction to the planets and their moons. A complete beginner would require, in my view, a simpler introduction to the bodies in the solar system beforehand.

John Chuter is a long-time member of the BAA, joint BAA Archivist, FRAS and member of several other astronomical societies. He has been interested in astronomy since aged seven. Retired from a career in teaching, he wishes to develop his astronomical interests as fully as possible.