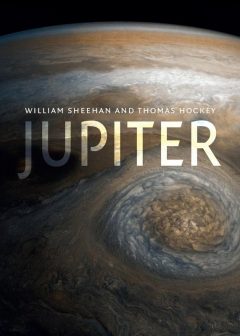 In this book, Sheehan and Hockey attempt to provide a general overview of the Jovian system. Both authors have several astronomy books to their names: Sheehan is an astronomical historian and amateur astronomer, while Hockey is a professor of astronomy.

The scope of this book is very wide-ranging, including chapters on ancient observations of Jupiter, the origin and structure of the planet, features in its atmosphere, its satellites and the Shoemaker-Levy 9 impacts. It also features results from spacecraft – including some initial results from the current Juno mission.

Not unsurprisingly, a dedicated chapter on the Great Red Spot is included. This particular chapter gives some short biographies of some of the great Jupiter observers of the past, including the BAA’s Reverend T. E. R. Phillip and B. M Peek, plus Elmer. J. Reese of the Association of Lunar and Planetary Observers (ALPO). Dr John Rogers, the current Director of the BAA Jupiter Section, also gets several mentions.

In general the book is well written and easy to follow. It is also well illustrated, with numerous colour and black-and-white illustrations. There are a number of spacecraft images, plus amateur images and drawings.

There are five appendices which include details of the planet and its satellites, dates of conjunctions with Venus, Mars and Saturn and a glossary. A list of references for each chapter is also given, plus a table of opposition dates up to 2029.

I did find a few minor issues and shortcomings. Generally the reproductive quality of the images and drawings is very good. However in my review copy, much of the text on the figure showing Jupiter’s internal structure was very difficult or impossible to read. Furthermore, although many images of the planet taken by spacecraft are shown north upward, there is no consistency in the orientation of the other figures. Some amateur images and drawings are shown with north upwards, while a few figure captions indicate that some amateur drawings are orientated south upwards. This lack of consistency may be confusing to beginners and general readers alike.

The glossary could have benefited from the definition of a few extra terms within the text, such as angular momentum. The term opposition is described several times in this book, but in one instance on page 12, it strangely describes the planet as being in opposition when ‘it can be seen lording it overhead at midnight’.

The book devotes a complete chapter to some basic tips on observing. Although it describes how to make central meridian transit timings, it doesn’t describe how to derive longitudes from such timings.

Despite these minor shortcomings, I enjoyed reading the book and it provides a good overview of the Jovian system for a general reader.

Mike is Director of the BAA Saturn, Uranus & Neptune Section and works in the spacecraft industry