Kepler and the Universe: How one man revolutionized astronomy 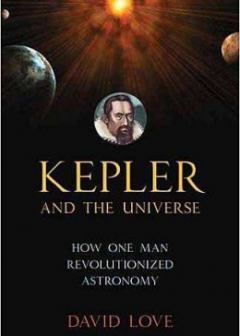 Johannes Kepler (1571−1630), discoverer of the elliptical nature of planetary orbits and much else besides, has long been the subject of scholarly research in the history of science, but accessible biographies for the general reader have been thin on the ground. Therefore this new biography by David Love, a retired accountant with a bachelor’s degree in astronomy from University College London, is very welcome. After an introductory chapter that helpfully describes the state of astronomy before Kepler’s time, Love presents a generally readable, factually accurate account of Kepler’s life and work.

The text is well-illustrated with photographs and diagrams. The book is not a work of original scholarship, but it is not intended to be. It is supported by plentiful references, many of them to the best scholarly works.

The book does have some significant drawbacks. The most serious of these is a tendency to see history through the eyes of the present day. For example, Love states that Kepler’s tutor, Michael Maestlin, was ‘one of the very few people in the whole of Europe who recognized … that the Copernican system was correct’. There was no inevitability in the late sixteenth century that Copernicus would be ‘recognized’ as being correct. Indeed, there were some good scientific reasons at the time for not supporting Copernicanism, quite apart from any religious doctrines.

In addition, the book sometimes reads like an introductory textbook on modern astronomy that uses historical examples as explanations. For example, much of the three-page section on the 1604 supernova observed by Kepler is devoted to a discussion of supernovae in present-day astronomy, while saying little about what the apparition meant for Kepler and his contemporaries. The book’s epilogue, which is mostly a potted summary of the development of astronomy since Kepler’s time, would have been better used as an assessment of the significance of Kepler’s work in the history of astronomy. Such an assessment would have made the book a much more satisfying read.

Where this book shines is in its portrayal of Kepler the human being. His work is set in the context of his frequently traumatic personal life, that saw the deaths of eight of his twelve children and frequent moves across war-torn central Europe, often dictated by the unstable religious and political climate of the time.

Overall, Kepler and the Universe works well as an accessible general introduction to the subject. Yet for a fuller picture of Kepler’s life and work, it will need to be read in conjunction with some of the excellent works cited in the references and the bibliography.

Lee is deputy Director of the Historical Section, and was recently awarded a PhD at the University of Leeds, on the history of Kew Observatory. At the time of writing he is researching the history of Greenwich Observatory for the National Maritime Museum.