Kew Observatory and the evolution of Victorian science, 1840−1910 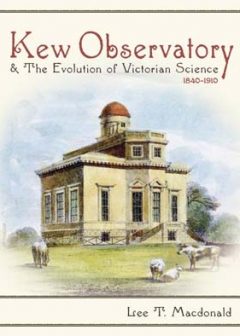 In recent years, the King’s Observatory in the Old Deer Park at Richmond has been a neglected part of our scientific heritage. Since being abandoned by the Met Office in 1981, it has been used as private commercial premises, and in 2014 permission was granted for a change of use from commercial to residential. Now in Kew Observatory & The Evolution of Victorian Science, 1840−1910, Lee Macdonald has brought it back to life – if only in our imagination – and given us a glimpse of its glory years. He tells the story of how the observatory, commissioned by George III for observing the 1769 transit of Venus, became a world-leading centre for geomagnetic researches, meteorology, standardisation, and solar physics.

In the late nineteenth century it eventually morphed into the National Physical Laboratory (NPL). In 1842 the Kew Observatory was placed in the hands of the British Association for the Advancement of Science to enable the creation of a geomagnetic and meteorological observatory, to the disquiet of some, given that a publicly funded
Magnetical & Meteorological Department existed at Greenwich. Occasional subterfuge and deception were employed to ‘keep the show on the road’. Despite attempts in the 1840s to discontinue the observatory, by 1859 it had five paid staff and was an internationally recognised institution. This was due in no small part to it having become a leading centre for the standardisation and testing of high precision thermometers, barometers, and other scientific instruments. In the 1860s Kew became also the home of a pioneering programme of solar photography.

Conflicts of personality and scientific ambition – involving Sabine, Airy, Herschel and others − formed a dark thread running through the entire story of Kew. The consequences of these for its work and survival are comprehensively related inthe book, as is the role of private patronage. By 1870, Macdonald points out, ‘the “public” observatory’s remit was strictly meteorological data collection, while control of the solar research remained very much in the hands of self-funded devotees of science’ (p.121). When the Royal Society took over control in 1871, Kew having become an insupportable burden for the BAAS, the majority part of the funding was from private sources. Macdonald shows how the need to be self-financing, by 1885 had created a situation where ‘Kew was less an experimental observatory… than a laboratory that tested scientific instruments, predominantly on a commercial basis’ (p.164). Consequently, the merging of the observatory into the newly founded National Physical Laboratory in 1900 marked the culmination of a natural evolution.

This fascinating and thoroughly researched book has made use of much previously unpublished archive material. 37 pages of endnotes and an 18-page bibliography add to its value. I would thoroughly recommend it to anyone who is interested in the story of our astronomical heritage, and particularly to those with an interest in the subtle interplay of private science and public science as Victorian Britain emerged from the age of the ‘Grand Amateurs’.

David Sellers is vice-Chair of the Society for the History of Astronomy, and is the author of The Transit of Venus: the quest to find the true distance of the Sun (2001), and In search of William Gascoigne: seventeenthcentury astronomer (2012)