Life on Mars: What to know before we go 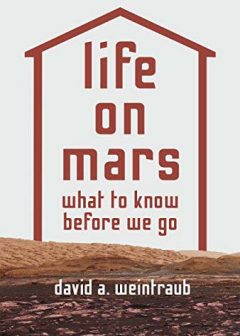 In this thoughtful and authoritative book, David Weintraub (Professor of Astronomy at Vanderbilt University) discusses the future of Mars explo­ration. With plenty of historical context, Weintraub explains how our ideas about possible martian life have evolved, from canals and chang­ing albedo patterns, via the sensational martian meteorite episode to the unexpected presence of atmospheric methane (of which some ‘detections’ are shown by the author to have been false claims). In this era of sup­posed ‘Fake News’, he re­minds us that the famous Orson Welles broadcast of H. G. Wells’ War of the Worlds could have caused only lim­ited panic. It was good to read his opinion that Antoniadi’s classic studies of Mars had proved (or rather should have proved) the death-knell for the canals.

The author systematically shows how some past ‘evi­dence’ of martian life turned out to be based upon mis­guided hypotheses. His chap­ter on the mis-identification of a spectral infrared absorp­tion band originally thought mundane D2O or HDO, which it turned out to be) is a particularly good story. Indeed, even be­fore Percival Lowell, some astronomers had con­sidered that the apparent blue or green colours of the ‘maria’ were merely due to subjective colour contrast with the red deserts (though atmospheric scattering really does cause a blue colour in the equatorial maria at certain seasons). The idea that changing albedo patterns were due to vegetation was swept away (literally!) by the ingenious 1960s concept of windblown dust.

Describing future visits to Mars, NASA plans a crewed mission for 2032, although pri­vate enterprise and in particular the adventur­ous Mr Elon Musk appear to be more impatient. We must remember that the road to the first crewed Mars mis­sion has already been a long one, and one whose comple­tion date is constantly reced­ing into the future. So if I could add one last ‘What to know before we go’, it would be to remember that Patience is a Virtue.

Dr Richard McKim has patiently analysed all the BAA observations of the Red Planet since the opposition of 1979−’80, and is the longest-serving Director of the Association’s Mars Section.