Luna Cognita: A comprehensive observer’s handbook of the known Moon 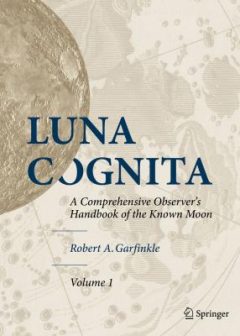 Luna Cognita, published in a three-volume set (and for an extraordinarily low price), will challenge the capabilities of any but the sturdiest of coffee tables, unless of course you get the electronic version. Written by American historian and keen observer Robert Garfinkle, who currently acts as historical advisor to our Lunar Section, the project is a remarkable achievement. It was begun in 1989, so it is almost the labour of a lifetime.

The BAA Lunar Section has added much to lunar literature: nearly all of its successive Directors (including the present one) have written excellent books, and until the 1950s several of them produced maps or atlases. To a Section member in the 1890s, the book and map by its first Director T. G. Elger would have been essential companions. By 1910 the keen observer would have needed the new atlas by second Director Walter Goodacre, and still later, his famous book. In 1938 the BAA published a Memoir entitled Who’s Who in the Moon, an essential guide to nomenclature that quickly went out of print. In the 1950s–’70s any serious lunar observer needed to have a copy of Wilkins’ & Moore’s The Moon. I still find these classics very useful for reference. And now there will be another essential work to turn to: Garfinkle’s epic survey of the known Moon, which includes many images, photos and drawings by members of our Lunar Section, past and present.

Garfinkle tells us at the start that he likes to write in a discursive style, and there is certainly room for it in over a thousand pages of text and illustrations. His writing is never dry, and this comprehensive new lunar encyclopaedia consists of hundreds of stand-alone sections, allowing you to dip into it as you please.

At some time or other we can observe up to some 59% of the Moon’s surface from Earth, and this percentage defines the territory covered by this encyclopaedia. Occasionally it ventures some way into the ‘forbidden’ regions not visible from Earth, with such illustrations as a 1930s chart by E. F. Emley (of ‘Barker’s Circle’ fame) extrapolating the near-side bright rays onto the other hemisphere, and the early spacecraft images of the far side.

The book is richly illustrated with an exceptional selection of photos, maps, drawings and lunar ephemera. From a postcard used to illustrate ‘Luna’ stockings via rare lunar-themed cartoons, old telescopic drawings and maps, to high-resolution modern telescopic images, these volumes are packed with interesting and unusual illustrations rescued from historical books that can only be found in specialist libraries and archival collections. The large-page format is used to good effect. Many pictures were new to this reviewer, who collects historical Moon books. The quality of printing and presentation is highly impressive, and the books really are a pure joy to dip into.

Garfinkle begins with a survey of the Moon in human history and folklore, followed by details of the Earth–Moon system: movements, tides and theories. He defines the many types of lunar feature next, and moves on to describe suitable telescopic equipment, even discussing cleaning of optical surfaces. Observing tips and techniques follow, where it is good to see proper descriptions of libration and colongitude. There is even space for mentioning the Moon’s zodiacal light.

How to organise the bulk of such a massive work? For the descriptions of the surface, Garfinkle has followed a method adopted by many predecessors, so that each day of the lunation is described in detail and in sequence, with the waxing Moon in Chapters 7 to 20, and the waning Moon – briefly – in Chapter 21. Each mare, crater, rille, mountain or other detail is described in terms of its topography, together with potted histories of many of those persons after whom features have been named. I liked how he ended each chapter by reviewing the lunar nomenclature introduced in that particular section of the book.

Following the surface descriptions, the author deals with the observation of particular types of lunar feature such as rays, rilles, domes, wrinkle ridges, and lava-flooded craters. Chapter 28 focuses upon transient lunar phenomena (TLP or LTP). Next come chapters on measuring lunar height, albedo, drawing techniques, occultations, and both solar and lunar eclipses, the latter section being particularly rich in historical detail and laden with unusual illustrations. This concludes volume 2 (Chapters 13 to 32).

Each volume is preceded by a contents list covering all three volumes, while volume 3 contains an exhaustive set of appendices. Here you will find ephemerides, formulae, catalogues of feature types, and even a reproduction of the Updated lunar atlas of Edmund Neison, for the sound reason that Garfinkle considers his charts the ‘cleanest and most useable lunar maps drawn in the late nineteenth century’. The appendices include details of space flights to the Moon, and lists of zodiacal stars that can be occulted by it. Above all, they are valuable for their rich reference lists of lunar nomenclature (including those crater names suggested by various authorities but rejected by the IAU). The book closes with a glossary, bibliography, and indices organised in terms of subjects, names and named features.

In a work of this size, a few mistakes are inevitable, and it may be noticed that Figure 7.74 has been repeated in Figure 7.75. I regretted that chapters 7 to 20 do not fall within the same volume, and that the pages are not numbered in the traditional manner. But everything about these volumes demonstrates the most meticulous attention to detail, arrangement, editing and proof-reading. In strongly recommending Luna Cognita to the reader, I warmly congratulate both author and publisher in having brought us an affordable and truly monumental lunar encyclopaedia.

Richard is Director of the Mars Section, an Archivist and Trustee of the BAA, and a past President of the Association (1993–’95).