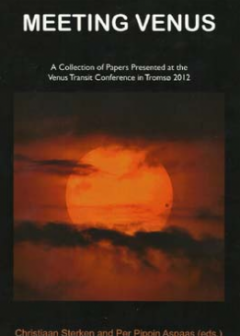 This e-book contains 19 papers presented at the Venus Transit Conference in Tromsø on 2012 June 2−3, just prior to the Venus transit in the night of 2012 June 5−6 in this part of Europe. Most of the papers focus on the historical aspects and describe how the organisation of expeditions to different places on the Earth was influenced by national prestige and international competition. They show that the Venus transits in the 18th century had a major impact on the development of science as an global enterprise. The target groups for the book are amateur astronomers and the general public, but attention to the political considerations behind 18th and 19th century science strategies makes it also good reading for historians of science.

Edmund Halley was the first to suggest that measuring the exact times of the ingress (start) and egress (finish) of a Venus transit over the solar disk from different geographical locations allows the distance between the Sun and the Earth (the so-called Astronomical Unit) to be calculated. He was well aware that to collect the required scientific data an international approach was essential.

In particular, the transits of 1761 and 1769 were observed by many expeditions from a variety of places all over the Earth. Expeditions were expensive, so funding was a major issue. International prestige played an important role in financing these enterprises. Some of the expeditions were true adventures, and several papers describe the heroic efforts of scientists to obtain useful data. Frequently, bad weather destroyed the chance to get useful information.

Particularly interesting are the descriptions of the contributions of individual researchers who played a major role in transit expeditions in the 18th and 19th century. They range from the amateur astronomer Anders Hellant to scholars like Wargintin, Deslisle and Lalande. The Jesuit Father Maximilianus Hell is of particular relevance for this book and his personality and achievements get ample attention.

The book has three major parts, viz. (a) Venus transit histories from Northern Europe 1761–1769; (b) Other transit histories, 17th−20th century; and (c) The Venus transit of 2012 from Northern Norway. The majority of the papers describe the historical background of the participation of several countries including Sweden, France, United Kingdom, Austria/Hungary and Russia in different transit expeditions. They give a good insight into the motives to participate, but also the problems to overcome.

The book also contains a few reports of the 2012 transit observed in Tromsø and nearby. Tromsø was an excellent place to be, because of the Midnight Sun; the entire transit from ingress to egress could be observed from there, provided the sky was clear.

As already mentioned the emphasis of the conference is mainly on the historical aspects of Venus transits. Limited attention is given to the astronomical and scientific aspects of a transit, such as e.g. the black drop phenomenon, the development of the cusps and observations of the aurora (the Venus atmosphere). This does not detract from the fact that this book is fascinating reading for amateur astronomers and historians of science, and also the general public. It illustrates quite well how the Venus transit expeditions have contributed to the development of international science.

The book is available as a free e-book at the persistent URL http://hdl.handle.net/10037/5195. Separate chapters can also be downloaded from the Journal of Astronomical Data: http://www.vub.ac.be/STER/JAD/JAD19/jad19.htm.