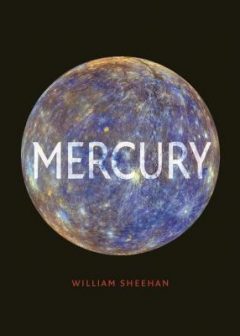 There are fewer than two dozen books devoted to Mercury and this new one is easily the best introduction to the innermost planet, published at a time when a new space mission is underway. In six engaging chapters Bill Sheehan takes us on an historical path of discovery, from a time when the planet was merely a shy, naked eye enigma to the revelation of the iron-cored and battered rocky world explored by Mariner and Messenger.

Schiaparelli’s early studies are presented and quoted in detail, and it was nice to see his original drawings finally compared with modern CCD images. Schiaparelli – who damaged his eyesight by following the planet close to the Sun in daylight – realised how difficult it was to represent upon paper the sometimes complex details that quivered in the field of view.

There are very good biographical details given for Schiaparelli and the other main observers, with plenty of unique illustrations by the author and others.

BAA observers have sought out Mercury at dawn or dusk since 1895. In 1909 McEwen, Director of the Mercury & Venus Section, was able to show by direct observation that its rotation period must be far longer than a day. It was left to Schiaparelli, and later Antoniadi, to postulate that it was precisely equal to the orbital period of 88 days. After several years of study however, Schiaparelli sometimes found that the expected markings were absent or hard to see. Atmospheric veiling, rather than a mistake with the rotation period, was invoked as the explanation: an idea greatly developed by Antoniadi in the 1920s. Even BAA observers with smaller apertures noticed this curious phenomenon in 1944.

After the Arecibo radar results of 1965 it was realised that the rotation period was really 58.65 days, exactly two-thirds of the orbital period and roughly half the synodic period of 115.9 days. This is very clearly explained by Sheehan in his detailed Chapter 4, ‘Rotation’, which includes interesting details of the roles of American observers Chapman and Cruikshank.

The consequence of the orbital resonance for terrestrial observers (particularly those forced to be selective in their studies owing to high geographical latitude), is that the planet shows very nearly the same face at the most favourable morning or evening elongations over several years, before presenting other, unfamiliar longitudes. All would now became clear and, after collecting further observations of the less well-observed longitudes, Dollfus and Murray could compile an accurate albedo map that would stand the test of time up to the space missions.

After a thorough survey of the surface of Mercury – revealed in its geographical and geological entirety only since 2009 – Sheehan concludes with an engaging history of the still more enigmatic world of Vulcan, the mythical innermost planet. The reviewer recalls how Vulcan – as well as the so-called ‘Twilight zone’ of Mercury – stubbornly persisted in science fiction stories as late as the 1960s.

Rich in anecdote and illustration, this is a fine new book which is to be strongly recommended.

The reviewer joined the Mercury & Venus Section as an observer in 1975. Following an unstable period in which there were several changes of Director, he offered to temporarily take charge of the Section in 2004. As a consequence he has ended up being its second-longest Director!