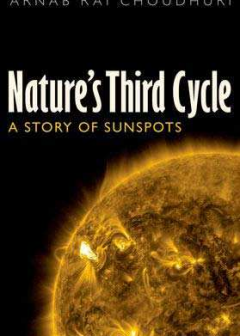 Initially I was curious about exactly what the third cycle in the title of this book referred to. It soon became clear that this is the well known 11-year solar cycle, with the first and second cycles referring to the Earth’s daily rotation and yearly orbital cycles. Perhaps less well known is that the solar cycle is on average 22 years in duration when the magnetic properties of sunspots are taken into account. It is these magnetic properties that are the main topic of this interesting and informative book.

This book by Arnab Rai Choudhuri, a professor of Physics at the Indian Institute of Science, has been written for a general audience and in a non-mathematical style that anyone with GCSE level physics will be able to easily understand. The more complicated physics and maths are given in the appendices.

The book begins by giving the background and history to the topic of sunspots and in particular their magnetic characteristics, before describing the properties of the fourth state of matter, plasma. This is where the reader is gently introduced to the solar dynamo theory which is subsequently used to explain the origin of the solar cycle as indicated by sunspots. The book then develops the flux transport dynamo theory, the currently favoured theoretical model of the solar cycle. This model has been used, for example, to give a theoretical butterfly diagram which is well known to solar observers. The final part of the book concentrates on how particles from the Sun can be transported to the Earth and their influence on us here on Earth.

What I particularly like is that the author has included stories about the various scientists and astronomers who have contributed to the understanding of the solar cycle, including his own. This gives a personal and interesting perspective to the book, especially as it helps to explain the development of the topic as well as giving an insight to the scientific process with its highs and lows. Seeing this from the perspective of a scientist in India adds to this personal aspect of the book.

In the preface, the author asks whether he has succeeded in writing a non-technical book to explain the physics behind the solar cycle – I certainly think he has. I recommend this book to anyone who wishes to gain an insight into the physics behind the solar cycle. There may be parts of the book that need some thought and understanding but this is worth the effort. This is the best book I have read on this topic.