Near-Earth Objects: Finding them before they find us 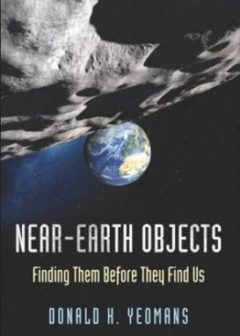 Here at last we have a book on the topic of NEOs which concisely encapsulates many if not all of the remarkable advances in our understanding of the nature of these objects, most of which seem to have come about during the last decade or so. For such a book to be successful, it needs to be written by someone who is a recognised authority on the subject, and in Don Yeomans we have such a person who, having held the enviable position of Manager of NASA’s Near-Earth Object Program Office at the Jet Propulsion Laboratory, Pasadena since 1998, has lived and breathed NEOs over many years now.

It being a fast-moving topic in more ways than one, Yeomans brings us up to date on all the various aspects of the fascinating quest to understand these small and elusive solar system bodies. In this nice easy read, he covers the ground quickly and injects a fair number of humourous anecdotes and wry comments, whilst putting over the essential facts in an essentially flawless and clear exposition of the subject.

The book’s 10 chapters are entitled: Earth’s Closest Neighbours; The Solar System’s Origin: The Classical View; How and Where Do NEOs Form; NEOs as the Enablers and Destroyers of Life; Discovering and Tracking NEOs; The Nature of Asteroids and Comets; Nature’s Natural Resources and the Human Exploration of Our Solar System; NEOs as Threats to Earth; Predicting the Likelihood of an Earth Impact; and Deflecting an Earth-threatening NEO. Also included is a section on References listing other key books and some landmark papers worth reading, as well as a couple of Indexes – one listing Asteroid and Cometary Objects mentioned in the text.

There are some nice nuggets buried beneath these chapter headings which the keen reader will no doubt unearth. I was surprised to find a photo of Mr S. B. Semenov, who back in 1908 had been an eye-witness to the infamous Tunguska event, having been thrown off a porch and having felt as though his shirt was on fire even though he was some 65km from the epicentre of the impact site at the time. Wondering when the next such nugget of information or unusual tale would turn up in some ways grabbed my attention and kept me turning to the next page in quick succession. I soon finished the book!

NEOs as a class are a rather mysterious corner of the cosmos, so it was good to see many of the important facts set out in a straightforward manner. Here you’ll learn the difference between Apollos, Amors, Atens and Atiras (all members of the NEO family), and between Yarkovsky and YORP effects. You’ll be able to read descriptions of some selected objects chosen from the inventory of noteworthy NEOs, learn what happened to them in the past and where they will turn up in the future. And of course, you’ll come across the names of some of the key players who have populated the subject and contributed to the body of knowledge about near–Earth asteroids and comets in their many and diverse ways.

To end, I should add that when it comes to the question of mass extinction of human civilisation along the lines that saw the demise of the dinosaurs some 65 million years ago, this book provides some very useful checks and balances to counter the scaremongering and hyperbole to be found across the media. As you read this review, you can of course rest assured that the worst predictions of the Mayans regarding the end of the world in 2012 December, with some folk prophesising a catastrophic encounter with a large planetary body named Niburu, actually failed to materialise! So, if you really want to know what the chances are of life as we know it being destroyed by an asteroid then have a read of this book – it should certainly put your mind to rest.

Dr Richard Miles is a past-president of the Association, and as Director of its Asteroids and Remote Planets Section claims the study of asteroids (and comets) represents the most promising frontier for the discovery and exploration of our Solar System in the coming few decades.