Neptune: From grand discovery to a world revealed – essays on the 200th anniversary of the birth of John Couch Adams 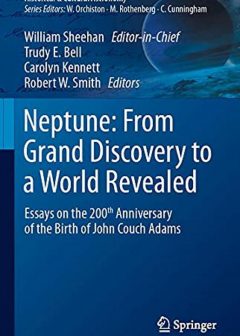 This book is another in Springer’s ‘Historical and Cultural Astronomy’ series. The editor-in-chief is William (Bill) Sheehan, with three other editors and a number of authors. The first sentence of this substantial work, by Allan Chapman, states: ‘The first sighting of the planet Neptune, by Johann Gottfried Galle and Heinrich Louis d’Arrest at the Berlin Observatory on September 23, 1846, was the culmination of one of the great international quests in scientific history’. This book has been written, therefore, to mark the 175th anniversary of this event.

The story behind it, however, has been mired in controversy for many decades. An Englishman, John Couch Adams, and a Frenchman, Urbain Le Verrier, had independently predicted the existence of a planet beyond Uranus, but publicised their findings in different ways. This book seeks to make clear the long and difficult path that finally established the two men as co-discoverers.

As the editors point out, the book has been written to appeal to the general reader as well as somebody with an interest in the subject. The chapters have been designed with this in mind. The first two deal with Newtonian gravitational theory and earlier discoveries of solar-system bodies. There are two very interesting chapters on Couch Adams and one on Le Verrier. Other chapters recount the German involvement; the role of William Lassell upon learning of the discovery of Neptune and his own discoveries, real or not; the academic politics that might have robbed Couch Adams from being a co-discoverer but for the tireless work of the Cambridge Network; and a re-assessment of the role of George Airy, Astronomer Royal at the time.

The chapter on William Lassell, written by Robert Smith and the late Richard Baum, alludes to the intriguing possibility that Lassell might well have been the first to discover the planet but for an unfortunate circumstance. The two chapter authors agreed to disagree about this possibility! Robert Smith’s chapter on the Cambridge Network etc. gives an insight into how we now allocate priorities in astronomical discoveries. The ninth chapter, on reassessing celestial mechanics in the light of Neptune’s discovery, describes the ‘unknown coincidences’ that allowed the two men to make successful and independent calculations. The last chapter goes into the methods used on other discoveries that have been made and are yet to be made.

The book has been illustrated throughout with many good-quality colour and black-and-white photos, tables and drawings. There is an extensive name index and general index. Each chapter has many references/appendices for further research. It is possible to read each chapter in isolation.

The book will, deservedly, become a standard reference work on the discovery of Neptune and its ramifications for the academic scientific world of the time. These ramifications now inform decisions made on discoveries that have been and will be made. It is for these reasons that I recommend you purchase a copy, or perhaps ask for it to be purchased for you by somebody who can then wrap it as a gift for Christmas!

John Chuter is a joint Archivist and Council member for the Association. He also sits on the Board of Trustees and is a regular contributor to the Journal.