No Shadow of a Doubt: The 1919 eclipse that confirmed Einstein’s theory of relativity 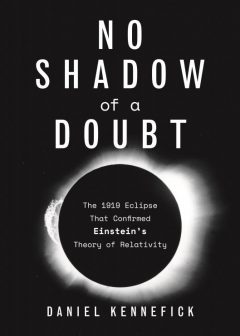 Luck often has a role to play in the advancement of science, and that was certainly the case with the total solar eclipse of 1919 May 29. Two British expeditions – one to Principe, a tiny island off the coast of Equatorial Guinea; another to Sobral, in Brazil – set off to observe distant stars that become visible during totality, to test Albert Einstein’s theory that gravity bends light. If stars near the Sun’s limb appeared to be deflected by a specific amount – just 1.75 arcseconds – then the German genius would be proven correct.

It was a stroke of good luck that the Great War had come to an end six months earlier. Preparations for the expeditions had begun long before the Armistice, but U-boat commanders hunting merchant shipping would not have cared a jot whether there was important science at stake.

The war had scuppered earlier plans to use the 1914 eclipse to test Einstein’s theory – another lucky break as his calculations were almost half-baked at that point: not until some time after the eclipse did Einstein realise that he had underestimated by about 50% the amount by which light should be bent by the Sun. Fortunately, he had corrected his error by the time of the post-war eclipse test.

It was also lucky that one of the expedition leaders, Prof Arthur Eddington of the Cambridge Observatory, was a Quaker who was opposed to the war and thus was spared the trenches. This bright young astrophysicist was one of the first people in Britain to learn of the ground-breaking theories of an obscure scientist from a country with which we would very soon be at war – and one of the very few who really understood them.

But, as author Daniel Kennefick shows in this excellent book – published bang on time to mark the 100th anniversary of Einstein’s eclipse – Eddington is by no means the only hero in this story, though his fame has since eclipsed that of everyone else involved. While Eddington set sail for Principe, the then Astronomer Royal, Sir Frank Dyson of the Royal Observatory at Greenwich, led the Sobral expedition (albeit from the comfort of London). He was, moreover, the man of influence who made the expeditions possible.

Weather rolled its dice, conceding only small victories to the two teams. That, coupled with decisions about the observing equipment that had to be packed up and shipped to far-flung viewing sites, resulted in photographic plates with extremely difficult-to-measure stellar images. This was a crucial test for relativity, but the results would fuel controversy for years to come.

The story, in Kennefick’s hands, is well told, with plenty to interest the non-specialist and the more expert reader alike. An appendix pores over the inconclusive data from one of the Sobral instruments, satisfying the most inquisitive and forensic reader. A bibliography, almost a dozen pages long, provides plenty of new avenues for those who want to know more. There’s even a very funny poem, an affectionate pastiche of The Walrus and the Carpenter written for Eddington by one of his contemporaries.

One is left wondering, however, how this particular chapter in science history might have been different if Eddington hadn’t been part of the equation – and how close he came to being written out of it. As the demands of the Great War grew, Dyson had to plead with the authorities that Eddington be allowed to claim ‘conscientious objector’ status and that his vital role on the eclipse expedition should be treated as his ‘war service’. Dyson didn’t find it necessary to tell them that Eddington’s work could prove the theories of a German scientist, toppling England’s Newton.

Andy Sawers is a writer and editor who is now switching from business and finance to astronomy. He is a member of the BAA, a Fellow of the Royal Astronomical Society and Chair of the Flamsteed Astronomy Society at the Royal Observatory Greenwich