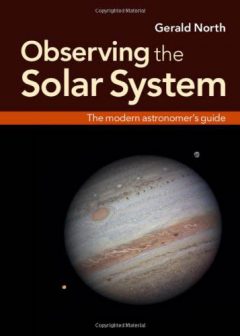 This book is about observing the Solar System and, to be honest, it does what it says on the tin! Before receiving the review copy, I popped into Waterstones and had a peek. The list of people mentioned in the acknowledgments is itself enough to whet your appetite!

Gerald North has written other books, for example, Observing the Moon, and Observing variable stars, novae and supernovae. The preface says that the intended reader is someone with limited knowledge wishing to move up to the next level of observing, with the possibility then of making scientifically useful observations. In this latter regard, I think the book succeeds very well but the reader may need a little more than limited knowledge. In my view the book is intended for someone who may already have a good knowledge and needs a thorough reference book on all matters to do with how to observe solar system objects.

There are 12 chapters, ‘Earth and sky’, ‘Moon and planet observer’s hardware’, ‘The solar system framed’, ‘Stacking up the solar system’, ‘Our Moon’, ‘Mercury and Venus’, ‘Mars’, ‘Jupiter’, ‘Saturn, Uranus and Neptune’, ‘Small worlds’,’Comets’ and ‘Our day time star’. Three thorough appendices cover collimation, field-testing a telescope’s optics and polar alignment, and there is a twelve page index.

Gerald has already written a book on observing the Moon. The chapter contained here is presumably for the sake of completeness. It could be argued that there is enough detail here for anyone other than a committed lunar observer.

I quickly realised that this book can be used in more than one way. The chapter headings say what will be discussed but there is a lot more information than the subject in hand. The book could just be read through, but only if you had reasonable astronomical knowledge beforehand. Readers of the BAA Journal would find no problem with it.

Particular information on a topic can also be found by using the index. This seems an obvious thing to say, but is relevant with this book as information can be found throughout the book on many topics.

The photographs and diagrams are in black and white, with eight collected pages of colour images. The occasional lapse of punctuation and some overly long sentences did not affect my enjoyment, and I would recommend this book for an interested amateur astronomer. An absolute beginner may prefer a simpler book prior to this, but this could easily be the second one purchased.