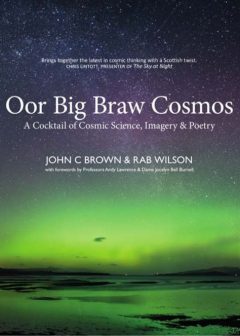 The illustrations quickly reveal the full scope of this book. From the Solar System and exoplanets to star formation and galaxies, the book sweeps through the heavens with stunning photographs, original artwork and even a touch of humour. Imagery from the likes of the European Space Agency and NASA sit comfortably alongside depictions of a solar eclipse by American West Coast First Nations people or the ancient Chinese, for example. It is good to see amateur astronomers getting a platform, too, as they provide a number of the photographs.

The section on exoplanets contains artists’ impressions of what life might be like on these newly-discovered but far-flung worlds. There is a familiar graphic explaining the expansion of the Universe, a photograph showing the aurora borealis over urban Glasgow, and a lovely shot of the Milky Way over the Callanish standing stones on the Isle of Lewis. Putting it another way, this book is visually the most wonderfully diverse assortment.

A chapter on great early Scots astronomers reveals the contribution made to the study of the skies by a country perhaps better known for its rain. Ironically, one of those Scots is Charles Piazzi Smyth, who was the second Astronomer Royal for Scotland in the 19th century. It was he who first actively explored Isaac Newton’s suggestion that telescopes should be sited on mountaintops in places such as Tenerife.

Then there is the poetry. Making up perhaps 10% of the book, it is written by Rab Wilson in old Scots – the language of Robbie Burns. The poems are a delight and often very funny, such as the one about Elon Musk sending his car into space. As Dame Jocelyn Bell Burnell says in the Foreword, ‘Astronomy is very visual’: the poems, she says, ‘give verbal colour to cosmic beauty and wonder’.

Readers from outside Scotland may glance at the verse and conclude that it is too difficult to penetrate, but they shouldn’t. Anyone who has ever sung ‘Auld Lang Syne’ as the clock strikes midnight on New Year’s Eve should have a go. A tip: reading the verse out loud helps comprehension immeasurably, as the meaning (and wit) can quickly be grasped if the eyes and ears are working together. (There is, apparently, a plan to put recordings of all the poems online, so look out for that.)

Above all, readers can be assured that the science of astronomy is at the core of this book, as is evident from the dedication to the memory of Scots genius James Clerk Maxwell; everything else in these pages is a charming adornment. The result is one of the most aesthetically and intellectually stimulating books our field has ever seen

Andy Sawers is a writer and editor who is now switching from business and finance to astronomy. He is a member of the BAA, a Fellow of the Royal Astronomical Society and chair of the Flamsteed Astronomy Society at the Royal Observatory Greenwich.