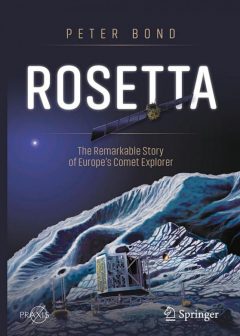 I am biased, but I think the European Space Agency’s Rosetta mission to comet 67P/Churyumov–Gerasimenko is one of the greatest achievements of the space age. To navigate the economic, political and technical hurdles required to get it launched was difficult enough, but then to navigate the spacecraft and its lander Philae on a ten-year journey to rendezvous with and orbit a four-kilometre cometary nucleus 600 million kilometres away was something really special.

As an engineer who worked on ground communications and a tracking system for Rosetta, I really enjoyed reading Bond’s very detailed account of the mission. There have been many books published on the cometary science arising from Rosetta, but this book is much more concerned with the operation and management of the mission, and it contains plenty of detail which would be difficult to find in a digestible form anywhere else.

Bond covers the initial proposals and planning for a comet sample-return mission, which started just after the Giotto encounter with 1P/Halley in 1985. He explains how the mission morphed from a joint NASA/ESA sample-return project into an ESA-only comet orbiter and lander. He includes detailed descriptions of the scientific payloads on board and the spacecraft development leading up to the planned launch in 2003. The original target comet was 46P/Wirtanen, but an Ariane launch failure in 2002 led to a postponement and a change to 67P. The fact that this was a larger comet with a stronger gravitational field would lead to problems ten years later, when the Philae lander bounced three times over the surface due to problems with a landing system designed for a smaller comet.

Launch finally occurred on 2004 Mar 2. Bond documents the cruise phase in fascinating detail, including multiple planetary and two asteroid flybys, a deep-space hibernation, and the final approach to the comet. In 2014 August, Rosetta finally arrived at 67P and started to send back stunning images. Unfortunately, most of the best were not released in a timely way and Bond includes a balanced discussion of the politics involved in the release of data from the main OSIRIS camera. This is something that ESA does rather differently to NASA, since the scientific instruments on ESA missions are generally funded by institutions which expect exclusive access to the data for a period to allow them to produce scientific results. While this is understandable, it did not help with the PR of a very high-profile mission.

In 2014 November, Philae was deployed and landed on the surface of the comet. Rosetta continued to orbit the nucleus, while the comet’s activity increased as it headed in towards perihelion. Bond describes how the spacecraft had to back away from the nucleus to avoid problems due to dust particles blinding its star sensors. The final act on 2016 Sep 30 was switching off the spacecraft by ‘landing’ it on the nucleus, 12 years after launch and 30 years after the mission was conceived.

There are a few technical errors in the text, but these are not significant and would not be noticed by most readers. One of my pet irritations is misuse of units to ‘explain’ things more clearly. Think lengths in double-decker buses or volumes in swimming pools. Also, the use of far more significant figures than justified can be irritating. This book is mercifully free of that kind of thing, but there are a few cases where my eyebrows were raised. Bond quotes a miss distance during one of the Earth flybys as 2,479.523km. Accurate to a metre. Really? Also, if you are going to illustrate something with an analogy, it is best to make sure it is correct. The encounter velocity of Giotto with comet 1P/Halley was 68.4km/s. At this speed, Bond says you could cross the Atlantic in 11 minutes. That is not long, but I think the true duration is more like a minute. These things are not that important, and they certainly do not detract from the quality of the book, but they do show that the reviewer has actually read it!

The final chapters of the book cover what we have learned about 67P and comets in general. These are accurate and interesting, but where this book really shines is in the day-to-day descriptions of how a group of very clever people managed to fly a spacecraft to a comet and land on its surface. Bond has done an excellent job covering that aspect and I would recommend this book to anyone who wants to know a bit more ‘behind the scenes’ detail on this mission.

Nick James is Director of the BAA Comet Section and an engineer in the space industry. He led the team responsible for the Intermediate Frequency Modem System, which enabled ESA to track and communicate with Rosetta.