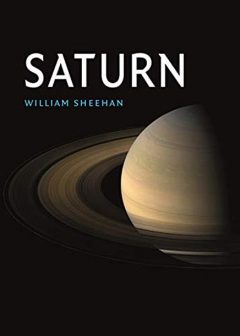 Much has been learnt about the Saturn system in recent decades, particularly from the Cassini mission. A few books on the planet and the results of this mission have been published in recent years; this recent title is by the well-known astronomy historian and amateur astronomer William Sheehan. The book is simply called Saturn, and is the latest in the Kosmos series of books on the Sun, Moon and planets produced by the Reaktion publishing house. Indeed, Sheehan has already written one book on Mercury and co-authored a book on Jupiter in the Kosmos series.

This book sets out to provide a general overview of the Saturn system. Much of the book provides modern information and understanding; especially as derived by spacecraft including Cassini and the Huygens lander.

However in the first two chapters, Sheehan usefully provides an historical context of how our understanding of the planet has slowly evolved from ancient times, through the discovery of the rings and up to the mid-20th century. Many of the observers and scientists who contributed to this understanding are described here, and indeed throughout the book.

Not surprisingly, a separate chapter is devoted to the planet’s most famous feature – the rings – including on how they may have formed and how gravitational interactions have sculpted them. Other chapters address the Cassini–Huygens mission in more detail, and the planet’s satellites.

The final chapter of the book provides a brief guide to observing Saturn, which is useful as it is an object that many amateurs like to observe. This chapter also includes predictions for the eclipses, occultations and transits of the satellite Iapetus in 2022. Such events are relatively rare and only occur a couple of years before each ring plane crossing.

There are separate appendices giving data on the planet, rings and satellites, followed by a good bibliography.

Sheehan has managed to cram a lot of information into a book of 224 pages, and his writing style is easy to follow.

Like the others in this series, this book is profusely illustrated with many fine colour and black and white images, although a couple are printed a little darker than others. The illustrations include amateur and professional drawings, plus images taken from the Earth and by several spacecraft. There is a good selection of images taken by Cassini, but one omission is that there are no images of the surface of Titan from the Huygens lander.

There are a few minor errors here and there in the text and figure captions. For example on p.64, the table on the ring plane crossings sometimes only lists two Earth ring plane crossings where in fact there should be three. Also, a couple of the crossing directions are the wrong way round.

However these minor errors do not detract from this good, comprehensive overview of what Sheehan aptly describes as the most stunningly beautiful object in the solar system.

Mike Foulkes is Director of the BAA Saturn, Uranus & Neptune Section and works in the spacecraft industry.