Solar system maps: from antiquity to the space age 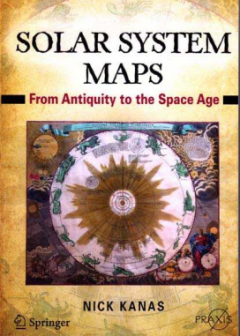 Solar System Maps is a very thorough description of our developing knowledge of the solar system from antiquity to the space age, and expertly interprets the fascination of the night sky, especially in the context of the Sun, Moon and the wandering planets, from the time of prehistoric man to the present. If this seems a tall order, consider that much has been documented, whether by the interpretation of stone circles and monuments of Europe, documented classical European views, the views of the Renaissance and down to our present knowledge of the solar system.

Much will already be familiar to the astronomical historian; what makes this book different is that Nick Kanas has put this vast history into its timeline and has expanded it in what he calls World Views. The chapters are therefore logically structured in a way that enables the author to clearly describe the profound developments and the individual players responsible for our interpretation of the complexities of the solar system:

Each chapter is a self-contained unit in which Kanas explores how increasing knowledge led to paradigm-shifts, from the classical Earth-centred Ptolemaic universe to the Sun-centred universe of post-Copernican astronomy; Tycho’s interpretation being an example of the hybrid theory of the solar system. The latter chapters demonstrate how the modern, initially European interest in the solar system swung over the Atlantic with the development of bigger telescopes and solar system exploration by spacecraft.

As might be expected with Kanas’ expert knowledge of astronomical cartography, each chapter is superbly illustrated with contemporary maps and photographs. A very nice touch is to give the provenance and dimensions of the original artwork for each of the many illustrations. Most are in monochrome but where possible, a colour version is provided that really brings the illustrations to life. Tables showing comparative solar system interpretations throughout the ages are a useful and most interesting inclusion in chapters describing the most rapid periods of developing knowledge. The book is rounded off with comprehensive notes and references for each chapter and an excellent bibliography and glossary.

As Kanas states in the Forward, Solar System Maps may be considered as a sequel to his 2007 book, Star Maps: History, artistry, and cartography. It is just as comprehensive, well researched and expertly presented, with the keen eye of an astronomical historian with a thorough knowledge of his subject. Indeed, these two modestly priced books could easily form the core of any modern library of astronomical literature devoted to its history.

Kevin Kilburn FRAS is Vice-President of Manchester Astronomical Society and Vice-Chairman of the Society for the History of Astronomy.