Space has no frontier 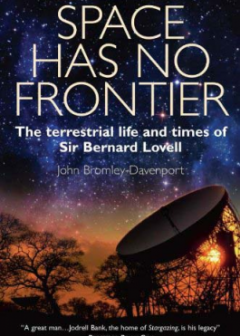 The author is a successful barrister, actor and public speaker who lives down the road from Jodrell Bank, which is presumably why he became interested in Bernard Lovell and his creation.

This is a thoroughly researched, very readable book of 25 chapters over 282 pages. There are extensive notes for each chapter, a glossary where jargon is explained, a bibliography and a detailed index. Thus there is no reason to not be able to find or understand anything within the text. A chronological list of events in Bernard Lovell’s life would have been useful, as there were times when I became slightly unsure of when things were taking place, but this does not detract from the enjoyment of reading the book. The author has made extensive use of Lovell’s diaries with many quotes used throughout. This gives the personal viewpoint of Sir Bernard in what was a very long, distinguished and active life.

The first chapters give an account of Sir Bernard’s early life. He was born on 1913 August 31 into a humble, religious background. He showed talents in music and cricket from an early age, but was not successful at school until he was taken to a lecture at Bristol University on ‘The Electric Spark’, by Prof. A. M. Tyndall, which changed the course of his life. He decided there and then that he wanted to read Physics under Tyndall. He won a scholarship to Bristol, going on to complete a PhD in thin metallic films. He then moved to Manchester University as an assistant lecturer. He married his wife Joyce, a younger sister of a close friend, in 1937, the marriage lasting for 56 years until Joyce died.

The story of how he then brought Jodrell Bank to fruition as a world leader in radio astronomy has been documented in many places, but this book brings the man behind this achievement to life in a way that has not been done before to my knowledge, with a wealth of personal detail not readily available elsewhere.

Throughout there are black and white drawings and photographs of varying quality to illustrate something of relevance within the text. In two places there are also collections of better quality black and white and colour photographs depicting events within Sir Bernard’s professional and personal life.

This book can be read by anybody with an interest in the subject matter. The writing style is clear, thorough and lucid. No scientific knowledge is necessary, jargon having been covered as mentioned above. This is a thorough reference work and I am happy to recommend it.

John Chuter FRAS is a newly appointed BAA Archivist, and a member of several other astronomical societies. He has been interested in astronomy since aged seven. Retired from a career in teaching he wishes to develop his astronomical interests as fully as possible.