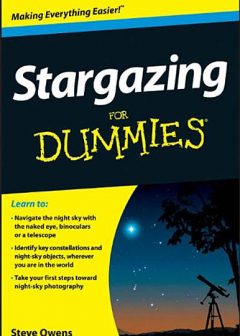 It will not have escaped the notice of readers of this Journal that public interest in the night sky shows a distinct rising curve. Science writer Steve Owens has produced Stargazing for Dummies, an attractive and densely-packed volume, written in an engaging style and sure to appeal to all those would-be astronomers (in both northern and southern hemispheres) seeking knowledge, whatever their age or level of understanding. Steve, winner of the Campaign for Dark Skies’ Joy Griffiths Award in 2010, is well known to many through his work on the International Year of Astronomy 2009, and his active support of dark-skies initiatives.

The contents list bears witness to the great volume and variety of topics in this book, which nevertheless will fit in a largish pocket: chapters on the changing heavens, buying and using binoculars and telescopes, photography, learning the sky, seasonal observing, satellites and Iridium flares, and a great deal more. Even subjects often taken for granted by other works are discussed: appropriate clothing for outdoor observing; the mechanism of night vision; finding dark sites…

The book’s refreshingly light-hearted approach ensures that the reader is unlikely to be frightened off by the sheer mass of information that has arisen from the adventure of modern astronomy. The latest developments, for example in cameras and smartphone astro-apps, appear alongside more traditional issues such as ‘star-hopping’ and the relative merits of reflectors and refractors.

The section showing constellation charts and listing interesting objects to be found within them occupies about two-fifths of the book. The selected targets are well chosen and many are within reach of those with modest instruments. The text goes beyond mere listing, introducing celestial curiosities (such as the north polar ‘Engagement Ring’), a dash of mythology, and the fact that some constellations happen to be difficult to find and observe!

Rich Tennant’s cartoons and Steve’s intriguing fact boxes (‘Once in a Blue Moon’, ‘The thirteenth sign’, ‘A star is simpler than an insect’…) add spice to the whole, and allow the reader to dip in and out if time is limited.

‘The sky is teeming with interesting things to look at’, writes Steve Owens, and so is this smart-looking book. It will probably be well-thumbed and sport many a bookmark before it has been owned for long.

Stargazing for Dummies will be a useful addition to the shelves of any amateur astronomer, and will make an ideal gift for anyone seeking to find their way around the sky, but who may be fearful of navigating the mysteries of equipment and terminology.

Bob Mizon is coordinator of the BAA Campaign for Dark Skies, and operates a travelling planetarium.