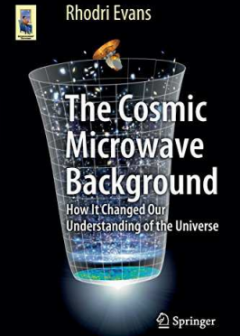 This book has a tone that reminded me of the ‘war books’ and escape stories of my youth, but with astronomers rather than officers. The subject is the radiation, discovered in the year I left school, that is the faint echo of the Big Bang. It’s a big topic and Rhodri Evans takes a fair swing at it: giving us the background from Lemâitre and the primeval atom through Hubble and many others, including Hoyle, to Penzias & Wilson.

He then leads us, with more than just glances at air-, balloon-borne and ground-based researches, through the satellites – COBE & WMAP – to a largely premonitory look at PLANCK and BICEP2. When you’ve read it, you’ll know a lot more about designing and building satellites. Incidentally, he makes clearer how astronomers derive those graphs of ‘multipole moments’ and how these indicate the geometry of space. He confesses that 75% of the universe is made of the unknown ‘Dark Energy’.

I think that the proof-reading could have been better: the definition of orbital eccentricity is wrong and 90% of cosmic rays are protons, not photons. Should Henrietta Leavitt be described as ‘part of Pickering’s Harem’ without qualification or explanation? Figures 3.4 and 7.11 differ by little more than the background colour. Was it really necessary to start this book right back with Ptolemy’s view of the universe? A third of the book is introductory material. The passage on Scott’s South Polar Expedition seems irrelevant to me.

Dr Rhodri Evans is married with three children, a Welsh-speaker, and has been involved with airborne astronomy for many years. He is a research fellow at Cardiff University and the only UK member of the SOFIA team. His familiarity with the astronomers and the instruments gives the book an appealing immediacy. I felt a guilty enjoyment as I read his distinctly debunking account of Edwin Hubble. He points out that prediction of the Cosmic Microwave Background dates back to Alpher & Herman’s paper in the December 1948 Nature (a lot earlier than I thought!). I welcomed that detailed account of the genesis and development of such an important idea.

I think this book is aimed at amateur astronomers, but it will do well also for the general reader who wants to follow up on this topical subject. Evans’ optimistic tone and willingness to state his own position are advantages.

Roger has now passed 60 years as an amateur astronomer and still won’t stop talking about the subject.