The Human Cosmos: A secret history of the stars 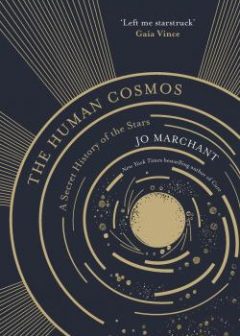 Jo Marchant’s well-received book Decoding the Heavens (2008), which explored the intricacies of the Antikythera Mechanism, has a worthy successor here. The Human Cosmos, in the author’s words ‘a guide to the long history of knowledge that people have gleaned from the stars’, is an extensively researched and fascinating book.

Visiting twelve periods in history from the Palaeolithic to the present day, Marchant, a best-selling author and speaker, explores humankind’s intimate links with the stars and our perception of a universe that has distilled not only our biology but has informed religious beliefs, power structures, scientific progress and other aspects of many cultures. Our gradual separation from the universe that forged our very being is also examined, and a powerful message emerges: ‘that disconnect comes at a cost’.

The reader will find much that is new and intriguing in The Human Cosmos. What depth of meaning lies behind the depiction of the Pleiades above one of the great bull paintings of the Lascaux caves? What led the builders of the Newgrange passage tomb to bathe it in solstitial sunlight? What was the significance of the Square of Pegasus to the ancient Babylonians and of oceanic ‘star paths’ to early Pacific voyagers?

Marchant also examines the ‘human cosmos’ in the context of more recent times: what Newtonian principles influenced the eighteenth-century American Constitution? What drove the investigation of the nature of starlight? The drift towards discoveries made by instruments rather than the human eye is explored, with both modern-day physicists and innovative artists defining reality and the cosmos in different and sometimes controversial ways.

Finally, we are expertly taken into the realms of astrobiology and chronobiology. What messages for us have meteorites, findings about exoplanets and the search for extra-terrestrial intelligence? What are the links between biological processes and celestial cycles, the Earth’s magnetic field, the progress of the Moon and the ‘global threat on a par with climate change’ of light pollution?

The most important message of The Human Cosmos is, in the opinion of this reviewer, the implication of the loss of the awe that we can experience when looking up at a pristine night sky. The author believes that the experience of the ‘spectacular ocean of light that has illuminated every society since the first glimmerings of human thought’ may not only spur us to consider our disconnection from the Universe but also ‘somehow make us nicer people’. She concludes: ‘This is a book about how we closed our eyes to the stars. The challenge now is to open them again’: a message that needs our earnest consideration, in a book that ought to be essential reading for all who are curious about what we really are and what our lives are really about.