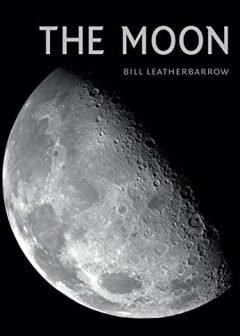 In the preface to his new book The Moon Bill Leatherbarrow states that his aim is to provide an accessible account of current lunar science. The content is therefore pitched at a level suitable for the budding amateur astronomer, and assumes no prior knowledge, but the more knowledgeable lunar aficionado will also find the well-woven story charting the history of lunar exploration a delight to read.

Subject matter ranges from the history of selenography and selenology (I never appreciated the difference) to the latest theories on the origin of the Moon and its landforms. The author knows his subject, being the Director of the BAA Lunar Section since 2009, former BAA President from 2011 to 2013, an active lunar observer and photographer and someone who knew personally some of the great amateur observers of the recent past.

Early chapters cover the history of observation from Harriott and Galileo up the age of robotic and manned exploration. Competing theories of the Moon’s formation and the origin of the surface features are explored, from the volcanism versus impact debate to the bizarre ‘Glacial Cosmonogy’ of the 1930s. This historical overview then moves on to the revolution in our understanding in the post-Sputnik era, and the latest theories on the origin and evolution of the Moon and its geological formations. A final chapter on observing includes a review of the features a telescopic observer will see, and concludes with a section on using spacecraft data available over the internet to conduct detailed study and analysis of surface features.

The book is illustrated throughout with high quality black and white and colour plates which are a real pleasure to look at, particularly the reproduction of lunar drawings. A little editing of some of the illustrations could benefit later editions, whilst figure numbers would help guide the reader from the text to the relevant picture. The text is accurate and up to date with only one or two points requiring correction, such as Bickerton’s contribution to the impact debate occurring in 1915 not 2015. The LRO website has been updated since the book was printed, so it will look a little different on the screen compared to the illustrations, but the differences are trivial.

This is a skilful amalgam of history and science and a great story well told. It should captivate the newcomer, inform the more experienced and inspire both to observe using a telescope or explore using a screen, mouse and internet connection.

Barry Fitz-Gerald has been interested in the Moon since he had his first view of it through a telescope of laughably small aperture in 1964. He is a member of the BAA Lunar Section and researches the Moon’s geology using spacecraft data. He is a regular contributor to the Section publications.