The observer’s guide to planetary motion 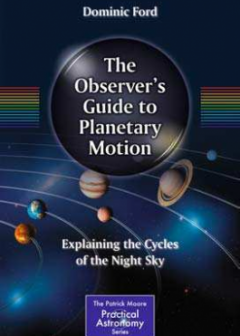 Dr Dominic Ford is the BAA’s website manager and also runs in-the-sky.org, a website which provides charts showing the positions of objects in the sky on any particular date.

The movement of the bright planets in the sky, like the change in apparent size of the Moon and the occurrence of eclipses, appears at first sight to be complex, but these motions have been understood historically by the superposition of various cycles of different period. The stated objective of this book is to describe the complex patterns of planetary motion that we see, but to do it in an accessible way, without any maths. The author does a good job of this by using tables and plots and so this is a book for the general reader, rather than the mathematically inclined.

The overall idea is a good one and the author achieves his objective quite well but I have a strong feeling that he really wanted to write a general astronomy book. The chapters range widely from the formation of the solar system, through descriptions of the planets to chapters on the deep sky and extra-solar planets.

Most of these things have a greater or lesser connection with gravitational motion but I have absolutely no idea how a 15-page appendix on deep sky imaging fits into the stated narrative. As is the way with most Springer titles the publisher just seems to let the author get on with it. A good editor could possibly have kept him more focused.

That said, the book is an interesting read and, given that it addresses a complex subject, it is generally error free. The author’s simplified descriptions are usually good and will appeal to the general reader, but I was intrigued to read that the Earth was shaped rather like an M&M. For those not in the know M&Ms are slightly less oblate than Smarties and nothing like the shape of the Earth. This is one of those cases where a knowledgeable editor could possibly have helped.

Nick James observes pretty much anything in the sky with a particular interest in comets. By day he is an engineer who leads a team responsible for developing deep space radio systems.