The secret life of space 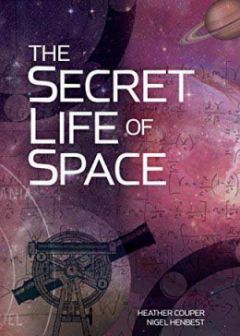 Authors Heather Couper and Nigel Henbest will need little introduction to readers of this Journal. Both have written scores of books, fulfilled numerous roles at the BAA and have been honoured by the International Astronomical Union in the naming of asteroids 3795 Nigel and 3922 Heather.

In their company, we are taken on a fast-paced tour of astronomical history from Stonehenge via the Antikythera Mechanism, up to the Chelyabinsk asteroid of 2013 and the Rosetta mission’s Philae landing of 2015.

As might be expected from two authors who have worked widely to increase public awareness of astronomy, the style of this book is light, breezy and conversational. Across eighteen chapters we are introduced to a wide variety of astronomical phenomena including black holes, the Hubble Telescope, comets and Dark Matter. By necessity, the authors provide a general introduction only to each topic rather than any in-depth analysis.

The strength of this book is its focus on the individuals who have contributed to our understanding of the universe. Potted histories of Sir Isaac Newton, Tycho Brahe and Lemâitre are interesting but it is when the authors’ personal connections come to the fore that the book really shines. Couper & Henbest have known and worked with many of the principal figures in astronomy over recent few decades and their recollection of these relationships with Sir Fred Hoyle, Sir Arthur C. Clarke and the staff of the Kepler, Horizon and Rosetta missions is where the book becomes most engaging.

Eight pages of colour plates are presented in the middle of the book but I feel that some of the topics covered would have benefited from illustrations or diagrams. Additionally, whilst the book is rich in quotations from the individual scientists and researchers, there are no references. I would have liked to have read more about the personal experiences being related but am unclear whether the words quoted are extracts from books and newspapers or from personal interviews given to the authors.

Overall, this is a good introduction for the general reader and an entertaining miscellany for armchair astronomers; it does not provide analysis of the topics covered or a detailed study of current astronomical work. Despite the florid jacket notes, this is a general and gentle overview of astronomy only and would be of most interest to casual readers or those just starting to develop an interest in the subject.

Martin Edmonds is a Fellow of the Royal Astronomical Society and has a particular interest in solar observation.