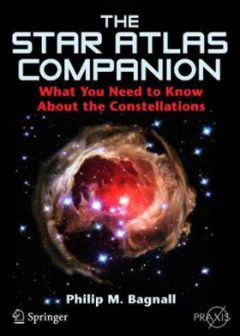 I’m not sure what to make of this book. The tag line under the title says ‘What you need to know about the constellations’, which sounds great. Furthermore, following the list of contents there is a paragraph entitled ‘About this book’ which explains that it is about the properties of the stars: how far away they are, their diameters, colours, masses etc., and whether they are double (or more) systems and whether they have planets. The introduction then explains that the book is an effort to describe what the stars are actually like, something you don’t get from such famous works as Norton’s Star Atlas or Uranometria, for example. And rather like those publications it’s certainly not a book to read in the traditional sense, but more of a text book or reference work. Following the Introduction is a section entitled ‘making sense of the data’ which explains very briefly a little about stellar distances, diameters, types etc.

Generally, the book limits itself to stars brighter than about magnitude 5.5 but many more interesting stars to a fainter magnitude are included, which is good. However, from the variable star point of view there’s no mention of U Gem, the main class of cataclysmic variable, although it can reach mag 8, and two of the sub-classes, SS Cyg and SU UMa, do get a mention although the latter rarely exceeds mag 11. Even the exotic AM and DQ Her systems are apparently worthy of a mention although the latter is unlikely to exceed mag 14. And how can you describe the constellation of Corona Borealis without mentioning the exotic variable star R CrB which usually sits at about mag 6? − whereas T Tau is mentioned ‘because it’s too important to leave out’. But perhaps that’s just the variable star observer in me! Open clusters are generally mentioned down to a magnitude of about 12, and generally, there is a heavy emphasis on stars with planets. Double stars are well covered as are stars with high proper motion – the latter even down to mag 13.5 or so.

The ‘chapters’ are divided into constellations – all 88 of them – and each constellation starts with a very brief description of its mythology, which I like, before describing the brighter stars and often some more interesting fainter ones. However, to this reviewer at least, the constant telling of how big this star is or how far away that star is became rather boring, but I suppose if you’re reading it just to find out about stars in a certain constellation it’s not so bad. Each constellation is also accompanied by a small diagram showing the stars as they appear to the naked eye and another showing their absolute magnitudes. A further diagram then shows the distances of each star from the Sun. Other diagrams show comparative sizes of the stars in each constellation and such other information as may be relevant. In spite of there being a general index, an index of stars by catalogue number (mainly HD numbers), a named stars index, an index of star clusters, asterisms & nebulae and even a people index, I thought they were a little lacking. For example, zeta Boo is described as a BY Dra star, but you’ve forgotten what BY stars are, so you turn to the indices only to find they are not listed. But, many types are listed in the introduction so you have to plough through them all to see if the one you want is described (it is; they are rotating dwarfs of low amplitude with the light variations caused by spots, flares and chromospheric activity).

Errors appeared to be few and far between although I did note that Bayer appears in the (people) index as on pages 3, 102 and 255 whereas his name actually appears on several other pages at least. Also odd is that in the star clusters etc. index, M19 is listed between M26 and M29!

There are a lot of anomalies but I suppose many are down to personal preference. For example, Hanny’s Voorwerp gets a mention but you’re never going to see that visually. It’s disappointing to find that the book features American spelling throughout which I always find slightly irritating, and it seems most peculiar to read that the Plough is spelt Plow – my spell checker didn’t like it!

But the book is certainly different.

Roger Pickard is a past President of the Association and is (still) its Variable Star Section Director.