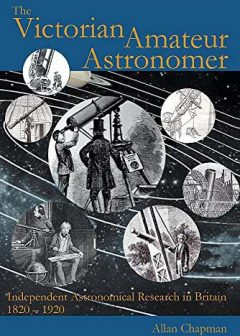 Dr Allan Chapman is a graduate of Lancaster University, receiving his D.Phil. from the University of Oxford. He teaches in the Faculty of History at Oxford University and is a popular television presenter and lecturer at astronomical societies across the UK. He was elected Honorary President of the Society for the History of Astronomy at its founding at Wadham College in 2002.

Dr Chapman’s book is less about what was discovered as it is about how and who was doing self-financed research, and those less well-off amateurs contemplating the heavens for their own sake.

Part 1 – The Grand Amateurs: Astronomical research with big telescopes financed by inherited money or wealth generated by the expanding industries in Victorian Britain. They had the independence to study whatever aspect of astronomy appealed and to discuss current research via the Royal Astronomical Society, the oldest society in the world devoted to astronomy.
Part 2 – Poor, obscure and self-taught: astronomy and the working class. Mid-nineteenth century there was a spectacular growth in astronomy at a more affordable level. After 1860 the founding of amateur provincial societies culminated in 1890 with the British Astronomical Association. Unlike the RAS these societies also included women.
Part 3 – The rise of the leisured enthusiast: Middle-class professionals, neither Grand-Amateur nor working class, could pursue their observations with affordable instruments. By the end of the century an amateur astronomical community had come into being; essentially what we have today.

The chapters are sprinkled with endnotes compiled into a list totalling over a hundred pages of detailed references. This is followed by a page of errata from the first edition, this reviewer’s only quibble: to avoid major repagination, errors in the main volume remain uncorrected. A twenty page index concludes the book.

This second edition of The Victorian Amateur Astronomer is essentially a re-printed version of the first, still the most comprehensive study of the subject. It is highly recommended.

Kevin Kilburn is an Hon. Life Member of Manchester Astronomical Society, a founder member of the Society for the History of Astronomy and a regular contributor to the BAA Solar Section.