Tycho Brahe and the measure of the heavens 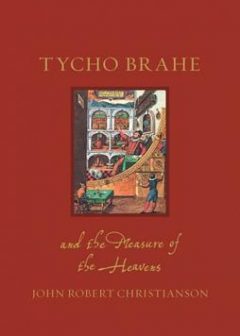 In this book John Robert Christianson, Professor Emeritus of History at Luther College, Decorah, Iowa, takes the reader through the life of Tycho Brahe (1546–1601). The subject’s life is told in six chapters, while the final seventh chapter deals with developments in the three quarters of a century following his death.

Brahe was a Danish aristocrat astronomer during the Scientific Renaissance, a period which saw astronomy move from a vehicle for casting horoscopes, based on classical civilisation’s ideas of the heavens, to an accurate, measured science. Brahe had two observatories at Uraniborg and Stjerneborg on the island of Hven, in the Øresund strait (the part of the Baltic Sea lying between Denmark and Sweden).

Tycho’s life at the royal court of Kings Frederick II (1534–1588) and Christian IV (1577–1648) is told. Titles bestowed by the monarch brought with them financial reward, which could be spent as the recipient saw fit – in this case on astronomical instruments and his own printing works to publish the results of observations. Frederick supported him whereas Christian did not, and as a result Tycho left Denmark, settling in Prague for the final years of his life. This biography includes the incident where Tycho lost the end of his nose and his romantic involvement with Kirsten Jørgensdatter, who was not of noble birth and hence could never be married to someone of Brahe’s position in life.

Tycho’s passion in astronomy was for accuracy of observation which, in turn, could be used to produce more accurate theories and hence more reliable predictions of future events. To this end, Tycho developed naked-eye light cutters or ‘pinnacidia’, so that measured celestial angles could be recorded with unprecedented accuracy on instruments before the introduction of telescopic sights. Not only was Tycho an astronomer, but he was his own observatory’s director, giving his students observing projects to complete.

This volume includes an index, is referenced and there is a reading list allowing the reader to fully follow up topics. However, a glossary of terms is not included, which resulted in the reviewer turning to Internet encyclopaedia websites to gain insight into some less well-known historical activities. The chapters are of a fair length and the images are particularly well matched to the text. Would I recommend this book? Yes I would.

Bill Barton is the Deputy Director of the BAA Historical Section.