Unseen Cosmos – the universe in radio 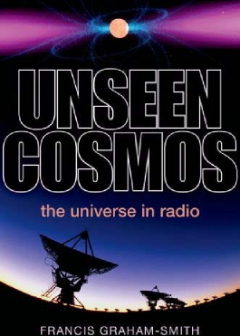 Following his wartime work on radar at Malvern, Francis Graham−Smith returned to Cambridge in 1946 to complete his degree, joining Martin Ryle’s team in its pioneering research into radio astronomy. Thirty-six years later he succeeded Ryle as Astronomer Royal. He has written several academic texts covering optics, photonics and radio astronomy and in 1988 co-authored (with Bernard Lovell) Pathways to the Universe, an explanation for the layperson of current knowledge in astronomy. He is well qualified to write a book describing how radio astronomy has led to a transformation in our understanding of the Universe: he was there as the story unfolded and he made important contributions to many of its chapters.

Other trails lead from incomprehensibly (at the time) distant radio sources to the conclusion that black holes are fact, not speculation, whilst closer to home the radio signatures of complex molecules reveal the chemistry associated with Giant Molecular Clouds formed in the death of stars. Some of these trails are still being forged. The investigation of how radio waves are affected by the plasma of our ionosphere and the solar wind led to the discovery of pulsars, and Graham−Smith goes on to explain how these have opened a new chapter in the exploration of relativity and cosmology.

The book focuses on what radio tells us about the Universe, rather than the technology itself and Graham−Smith links concepts to familiar objects such as mobile phones and television aerials. Some topics do require an extension of everyday understanding: the way that the outputs from two antennas can be combined to dramatically increase angular resolution is fundamental to why observing ‘in the radio’ has revealed so much. The book concludes with the latest development of this technique through the description of the current ‘big beasts’ of radio astronomy: LOFAR, ALMA and the SKA.

The book is a serious read, covering a broad range of subject matter and a variety of complex celestial objects and processes. It does flit backwards and forwards in describing the evolution of our understanding, but overall I thoroughly enjoyed this exploration of the Cosmos based upon what eighty years of radio observations have told us.

Paul Hyde coordinates the Radio Astronomy Group for the BAA.