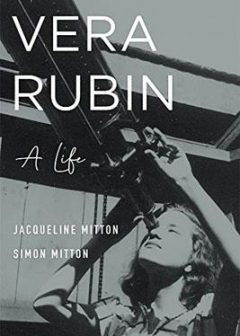 Vera Rubin (1928–2016) was one of the most outstanding observational astronomers of the modern era. Her meticulous research into the rotation of galaxies did much to convince the astronomical community of the existence of dark matter, which had huge implications for models of the expanding Universe. Rubin achieved this while raising four children, at a time when professional astronomy was still very male-dominated and women had to work hard toachieve recognition in the field. The 8.4-metre Large Synoptic Survey Telescope in Chile was recently renamed the Vera C. Rubin Observatory in her honour.

The husband-and-wife team of Jacquelineand Simon Mitton are ideally qualified to writeRubin’s life story. Jacqueline Mitton, a formereditor of this journal, wrote a paper on the trailblazing American astronomer Maria Mitchell that was published in the 2020 December issue [130(6), 349]. Simon Mitton is the author of a major biography of British cosmologist Fred Hoyle. To research this book, the two made extensive use of Rubin’s very large archive of personal papers. The text is well illustrated, though given that Rubin only died in 2016, it would have been good to have some colour images on the cover.

The book follows Rubin’s career broadlychronologically, beginning with her passionfor astronomy as a child. In her teenage years she built her own small telescope, took
astronomical photographs and joined a local astronomical society. From this time onwards, Rubin realised she wanted to do astronomy for a living. Theauthors describe how Rubin
achieved the three university degrees she needed to become a professional astronomer: a first at Vassar College (where Maria Mitchell had once taught), a Master’s degree at
Cornell and finally a PhD at Georgetown University.

Rubin enjoyed the benefit of a supportive husband, the physicist Bob Rubin, as well as some equally helpful colleagues. In addition, she was fortunate to find a job at the Carnegie
Institution of Washington’s Department of Terrestrial Magnetism (DTM), whose physicists were looking for an astronomer to make use of the image-tube spectrograph that had recently been developed by the DTM’s Kent Ford. This instrument greatly improved the sensitivity of photographic plates and thus gave a moderate- sized telescope the light-gathering power of a much larger instrument.

The authors show that Rubin was an observational astronomer, who was never happier than when in the dome of some large telescope in the south-western United States, taking spectra of galaxies. Eschewing theoretical speculation, she preferred to focus on what she could learn from the data she had obtained. She showed from her measurements of many galaxy spectra that the rotation speeds of galaxies did not drop with distance from the galactic nucleus,as the visible appearance of galaxies would suggest, but remained almost the same even in the galaxies’ outermost regions. This led her to conclude that galaxies must each be surrounded by a halo of unseen matter.

Not content with promoting her own career, Rubin worked over many years to improve the status and recognition of women in professional astronomy andscience more generally. She campaigned with considerable success against discriminatory language and practices at conferences and in publications. She became a hero to many eminent women astronomers, one of whom wrote to her that ‘if things are any easier for women like me, it’s because women like you have taken the time and energy to help make it so’.

I found this biography fascinating and a joy to read, with scientific concepts clearly explained for the non-specialist. I was often reluctant to put it down when other tasks beckoned. I heartily recommend it to anyone interested in extragalactic astronomy, the history of astronomy and the history of women in science.

A former Deputy Director of the BAA Historical Section, Lee Macdonald is currently employed on a Sackler Research Fellowship with Royal Museums Greenwich, researching the history of the Royal Observatory, Greenwich. He is the author of Kew Observatory and the Evolution of Victorian Science, 1840–1910 (University of Pittsburgh Press, 2018).