What stars are made of: The life of Cecilia Payne-Gaposchkin 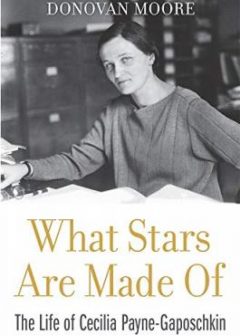 In 1923 a young Englishwoman named Cecilia Payne, recently graduated from Cambridge University with a degree in natural sciences, arrived at the Harvard College Observatory in Cambridge, Massachusetts. The HCO already had a strong reputation for research by such astronomers as Henrietta Leavitt, Williamina Fleming, Antonia Maury and Annie Jump Cannon. But Payne, employed as a theoretician rather than an observational astronomer, arguably outdid them all. Her doctoral thesis on the composition of stellar atmospheres was described by Otto Struve as the best astronomy PhD ever written. By careful analysis of the thickness of spectral lines, she overturned the conventional wisdom that the abundances of elements in stars matched chemical abundances on Earth. Rather, Payne made the startling suggestion that stars were primarily made of the lightest elements, hydrogen and helium.

Cecilia Payne was entirely correct in her assertion. Yet her thesis reviewer, the eminent astronomer Henry Norris Russell, persuaded her to put the findings in provisional terms, and her revolutionary ideas failed to find traction until Russell reached the same conclusion by other means several years later. Why was she ignored? It is tempting to suggest that her youth counted against her, even more tempting to suggest that her gender did. So, the time is ripe for a biography to assess her life and achievements.

Up steps Donovan Moore to write What Stars are Made of. Moore is not a science historian, coming from a career in journalism, TV reporting and production. So, the book is well-written and readable, but it is definitely ‘popular science’ rather than a scholarly assessment. There is nothing wrong with that – if Moore can bring Cecilia’s story to a wide, non-technical audience, he will have done her a service. But he seems to rely quite heavily on her autobiography for facts about her life. The early chapters – growing up in Buckinghamshire, leaving her first school but flourishing at St Paul’s Girls’ School in London, and life at Newnham College, Cambridge – suffer a little from being written by a non-Brit; for example, he describes a train journey from London to Cambridge with stops at ‘Royston, Baldock, Letchworth…’, listing the stations in back-to-front order.

He is on stronger ground once Cecilia reaches America. He recounts her personal life well; for example, I did not know that Norbert Wiener, the cyberneticist, was romantically interested in her. However, she married fellow astronomer Sergei Gaposchkin, a stateless Russian-born refugee. They had a happy marriage, although Sergei, a lesser talent and loose cannon, was considered by some to be a liability in the Harvard astronomy department.

So, was Cecilia Payne unfairly deprived of the credit for her PhD discovery? The introduction to the book is written by Jocelyn Bell Burnell, who of course discovered pulsars, and had to work hard to convince her supervisor that there was something worth investigating. That supervisor, Tony Hewish, famously won the Nobel Prize, and Bell did not. Yet as Bell herself points out, Nobel prizes don’t generally go to PhD students. I think that for both Bell and Payne, their youth and lack of a pre-existing reputation made it difficult for their discoveries to be accepted straight away. Both went on to distinguished careers; Bell was president of the Royal Astronomical Society and the Institute of Physics, Payne was Harvard University’s first ever female professor. I think that a book such as this will help to establish Payne’s reputation among the general public.

Do I recommend this book? As a definitive biography, no. But if (like me) you enjoy reading a popular biography of someone you knew a little about, I think you will enjoy it. And Moore had one big surprise for me – Cecilia was a member of the BAA! She joined in 1922, one year before she left for America, and was a member of the Computing Section. I do not know when her membership lapsed, but it is not impossible that she was still a BAA member when she wrote her ground-breaking thesis, which would place her amongst the highest achievers of all the members of our Association.

Mike is Director of the Historical Section and is a writer and speaker in astronomy, presenting talks around the UK and beyond.