William Parsons, 3rd Earl of Rosse: Astronomy and the castle in nineteenth-century Ireland 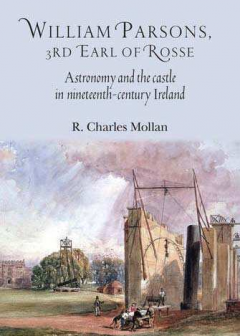 William Parsons, Third Earl of Rosse (1800−1867) is best known to astronomers as the builder of a 72-inch reflector with which he discovered the spiral structure of M51 in Canes Venatici, now known to be a spiral galaxy. Yet there is much more to Rosse than this: he was one of a distinguished family of scientists and engineers, in addition to being a privileged landowner at the heart of public life in an Ireland racked by economic hardship, not least the devastating Potato Famine of the 1840s.

Hitherto there has been no full-length biography of Rosse, so this volume of ten essays by a diverse group of historians, astronomers and others with an interest in Rosse fills a major gap in the literature. The book is aimed at the academic market, yet all the essays are at a level accessible to the general reader. The style and level of critical scholarship is somewhat uneven and one or two chapters verge on hagiography, but the book is superbly edited and there are very few errors.

The two authors likely to be most familiar to BAA members are Oxford historian Allan Chapman and the well-known deep-sky observer and historian Wolfgang Steinicke. Chapman sets Rosse firmly in the context of the nineteenth-century ‘Grand Amateur’ astronomers, who had the time and money to pursue their own research programmes. Steinicke surveys the many objects besides M51 that were studied and discovered by Rosse and his assistants.

Also on the scientific side of Rosse’s life, Cambridge historian Simon Schaffer examines the important issue of Rosse’s relationship with the scientific institutions of his time. Charles Mollan points to a strong tradition of engineering in the Rosse family and describes the immense technical difficulties that Rosse overcame in building his telescopes. There is also a substantial chapter on Rosse’s wife Mary and her remarkable work as a pioneer of photography. Sadly, both her photographs and the illustrations generally are not well reproduced in this book.

Among the other essays, there is a straightforward chronology of the Rosse family’s colourful history and exploits up to the Third Earl’s time; an assessment of the probable origins of Rosse’s interest in astronomy; and two discussions of his political life, one on his relations within the local area of Birr and another on his political opinions more generally.

I greatly enjoyed this book, from which I learned much about Rosse and his family as people, not just Rosse the astronomer. There are also many fascinating surprises, such as the picture of the skeleton tube of the 36-inch reflector built by Rosse’s son Laurence that resembles some modern amateur telescopes of this size. I recommend it to all deep-sky observers and anyone interested in the history of astronomy.

Deputy BAA Historical Section Director Lee Macdonald is currently based at the University of Leeds, where he is completing a PhD on the history of Kew Observatory in the nineteenth century.