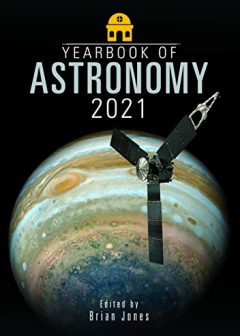 There are countless publications listing the events in the sky for the coming year, some meeting these aims better than others. For over fifty years Patrick Moore edited the Yearbook of Astronomy, initially as the Associate Editor under Guy Porter who was the principal Editor. The first edition was published in 1961 and described the events in the sky for the year 1962. The preface outlined the objectives of that new book, which were to show the positions of the stars and planets on a monthly basis, highlight other interesting phenomena, and include articles on various aspects of research and amateur activities.

After Patrick passed away in 2012 December, John Mason managed to keep the Yearbook going for another couple of years, but the 2016 edition was to be the last. Brian Jones learned that publication was to cease and set about recruiting authors and a publisher so as to continue this iconic book.

Whilst some have been critical, suggesting that the Yearbook had run its course and should have been laid to rest, the series continues and this is the fifth edition under the editorship of Mr Jones.

The original objectives of that very first edition have been retained. In the first section of the book, month-by-month charts of the sky show the brighter stars that an observer will see throughout the year, with two sets of charts: one for latitude 52° north and one set for 35° south. Accompanying these is a short narrative of the positions of the planets throughout the coming year, as well as dates of the quarters of the Moon and other astronomical highlights.

The next section is devoted to more detailed descriptions of each month in turn, with particular reference to the planets. Here the book deviates slightly from the pre-2016 editions, which also generally included a short account on something outside of our own solar system – e.g. a constellation, deep sky object or variable star. What the contemporary monthly chapters do include are relatively short essays (about 1,000 words) written by invited authors, on topics seemingly unrelated to the month in question, but covering historical, technical, and present-day scientific subjects.

The ‘Article Section’ of the book offers the reader longer articles by authors, both well-known and less-known, including prominent BAA members and Section Officers. As with the shorter essays these cover a range of topics, including: a summary of astronomy in the past year; the prospect of a human mission to Mars; archaeoastronomy; a technical essay on observing the Sun; an historical essay on Henrietta Swan Leavitt; and a fascinating article on some women in astronomy by Mary McIntyre, a topic which today is rightly being researched in greater depth. As with the shorter articles, these are very well written and presented.

For me, the articles have always been the unique appeal of the Yearbook, and even with a change of editorship and publisher it is comforting to sit in my favourite chair with a cup of tea and dip into those which take my fancy. The Yearbook has always been published in the weeks leading up to Christmas and I suspect for many it has been a staple under the Christmas tree, whether the recipient is an active observer, an armchair astronomer, or just someone who enjoys reading well-written and well-edited science.

The Yearbook of Astronomy 2021 continues the great tradition which Guy Porter and Patrick Moore started in the year man first went into space. This edition is a fascinating collection of essays and easily-accessible facts. For those of us who have the other editions, it is also a very fitting and enjoyable addition to the collection.