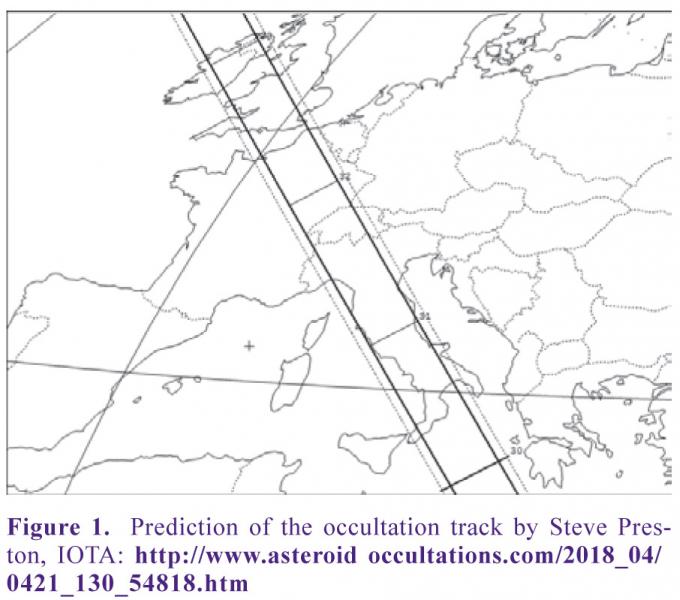 Astronomers seem to be entering a golden age for occultation astronomy now that star positions and the orbits of small solar system bodies are known to an unprecedented level of precision, largely thanks to the ongoing Gaia space observatory mission. By 2022, Gaia will have completed its work and the final data release will greatly enhance the accuracy of asteroid orbits.
Detailed predictions of forthcoming asteroidal occultations are issued many months in advance and such was the case ahead of an event involving asteroid (130) Elektra which was forecast to occult TYC-0408-0029, an 11th magnitude star in Ophiuchus, on 2018 April 21. Its shadow track passed over densely populated regions of the UK and Europe as shown in Figure 1.
Occultation observers determine the exact time when a star disappears behind a moving solar system object, followed by its time of reappearance. Each successful measurement made from a different location on Earth represents a line across what is in effect a silhouette of the object. These lines are called occultation chords. In this way, several differently positioned chords provide information about the size and shape of the shadow profile.
In the event, more than 30 stations participated in this, the most successful observation ever of an occultation by (130) Elektra. This asteroid’s shadow profile has never before been so accurately measured. At around 00:30 UT on April 21, observers from Italy, Switzerland, France, Belgium and the UK successfully recorded the occultation. Nine timings were made from the UK, by Peter Birtwhistle, Tim Haymes, Philip Denyer, Peter Tickner, Adrian Jones, Simon Kidd, John Talbot, Malcolm Jennings and Mike Collins. 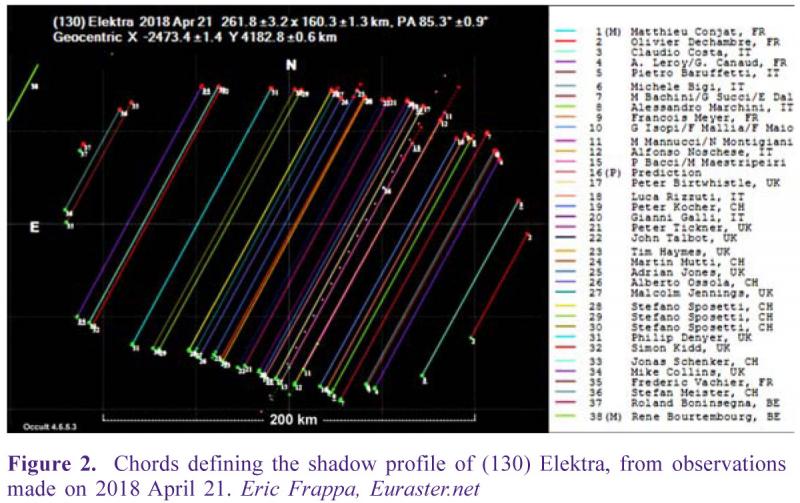 Currently, 35 measured chords define the shadow profile (Figure 2). Eric Frappa (www. euraster.net) has determined an elliptical profile of the asteroid with a size of 262×160km from the observational data. The chords are well distributed across virtually the entire profile; only at the eastern edge is there a gap. These successful measurements will also provide a highly accurate astrometric position of (130) Elektra which can be included in future orbit calculations.
In addition to measuring the profile of Elektra, the observing stations also looked out for very brief occultations caused by either of its two satellites, which measure roughly 6km and 2km across. Figure 3 is a near-infrared image depicting this triple system produced using the European Southern Observatory’s VLT/SPHERE instrument, a second-generation adaptive optics facility. The approximate shape of Elektra is clearly evident despite the fact that it measured only about 0.1 arcseconds across at the time (see https: //arxiv.org/pdf/1603.04435.pdf).
Since most observers used video recording, even changes in light lasting a fraction of a second would have been registered; in practice, no such events were recorded.
The path prediction was generated on 2018 Feb 27 by Steve Preston of the International Occultation Timing Association, USA (IOTA). This prediction proved to be very accurate in that there was only a slight path shift to the east, and the occultation occurred about four seconds later than predicted. This result is graphic evidence of the enormous improvements in prediction accuracy for occultations in recent years, and bodes well for increased participation amongst amateur astronomers in this type of study in future. 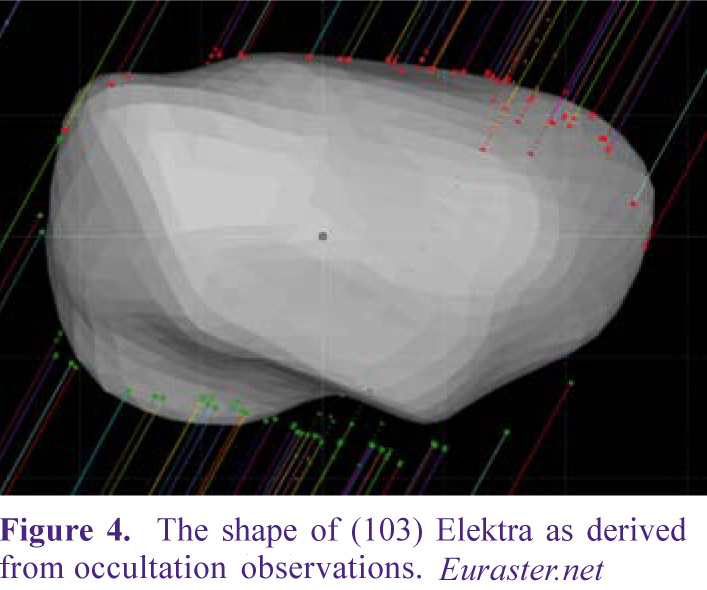 This is the twelfth occultation by main-belt asteroid (130) Elektra that has been observed worldwide. The previously most successful observation took place on 2010 Feb 20. On that occasion, the undersigned together with Andrew Elliott, Martin Cole, Peter Birtwhistle and Robert & Edward Simonson from the UK obtained seven timing chords, six of which were used to determine the asteroid’s profile. The result was an ellipse with dimensions of 255×155km. The present work has significantly refined our knowledge of the object’s shape as shown in Figure 4.
A further significant stellar occultation involving Elektra occurred on 2018 May 01 when its shadow first crossed South Africa before passing over Liberia and Sierra Leone. After traversing the Atlantic, it left the Earth in the eastern USA, where it was visible at a relatively low altitude above the horizon. At the time of writing, the results have yet to be fully analysed.
Acknowledgments
This report is based on an International Occultation Timing Association – European Section (IOTA-ES) press release issued by public relations officer, Oliver Klös (PR@iota-es.de) on 2018 April 25, translated by Alex Pratt. We also wish to thank Eric Frappa of Euraster, Josef Durech of the Astronomical Institute of Charles University, Prague, for shadow profiles and modelling via the Database of Asteroid Models from Inversion Techniques (DAMIT), and Dave Herald for use of his Occult software.

About IOTA/ES:
IOTA/ES e.V. (International Occultation Timing Association – European Section) is a registered association in Germany with over 70 members in 15 countries. For over 30 years, the work of its members has included the observation of occultation phenomena, the publishing of predictions and the worldwide coordination of observers. IOTA/ES also supports observers in publishing observational results and gives guidance on the technical requirements for scientifically useful observations. IOTA/ES publishes the Journal for Occultation Astronomy and organises the annual ESOP conference (European Symposium on Occultation Projects) – the next meeting (ESOP 37) takes place in Rokycany, Czech Republic, on 2018 August 24-29. The association also functions as a specialist occultations group in the German ‘Verein der Sternfreunde e.V’ (VdS).