29P/Schwassmann-Wachmann: A most enigmatic comet

Comet 29P/Schwassmann–Wachmann is renowned for its frequent outbursts of activity and for the fact that, as yet, no convincing explanation has been found for its unusual behaviour. It was discovered in 1927 by A. F. K. Schwassmann & A. A. Wachmann at Bergedorf Observatory, Hamburg, following one of its more energetic outbursts, reaching magnitude 13–14 at that time. It is a favourite of many amateur astronomers who monitor the comet, watching for its next outburst.

French amateur Jean–François Soulier was doing just this during the early hours of 2013 June 13 when his very first image, taken remotely from Chile, showed the object to be stellar in appearance, around magnitude 13.0 and clearly in outburst. Remarkably, Josep M. Bosch observing from Catalonia, Spain about 3 hours earlier found that 29P at that time was magnitude 16.4, i.e. in its quiescent state.

The suddenness of the eruption in brightness of 29P is a key feature of its behaviour and is associated with an outflow of material ejected from the nucleus by some initial trigger event. It is instructive to follow the growth of the newly-formed expanding coma, and for some time now I have used the 2.0m remotely-operated Faulkes Telescopes to investigate this aspect.

Following an earlier outburst of 29P which began on 2013 April 14, I made a prediction based on a possible 60-day rotation period that a subsequent outburst might occur on or about June 14 (±5 days), so it was heartening to see this prediction come to pass. Figure 1 (A)–(C) comprises three images illustrating the progressive change in position and appearance of 29P on June 13. The first two frames, both taken with 0.4m aperture telescopes, show the comet before and after this latest outburst and have been stretched to reveal the surrounding nebulosity, a remnant from its previous activity. Note the similarity in the appearance of the coma before and after the outburst, the effect of which has been to intensify the brightness of the nucleus alone. 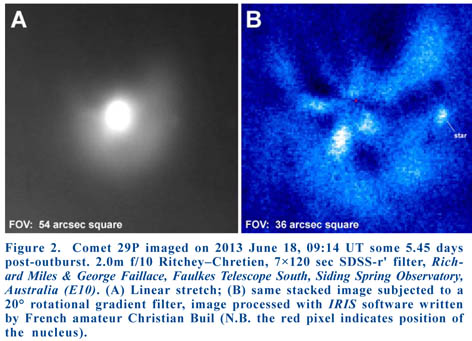 The first opportunity to observe 29P post-outburst using a 2.0m aperture came five days later on June 18, some results of which are reproduced here as Figure 2, showing a general view alongside an image processed using a rotational-gradient filter to reveal detail of the inner coma. Typical of many outbursts, a roughly spherical, expanding coma is visible, apart from a region northwards of the nucleus, where the coma growth is suppressed. Outbursts often produce an expanding coma which appears to be partially hindered in one preferential direction or another. In the filtered image, at least four discrete outflows of material are visible showing the complex nature of the streams of material ejected from the nucleus, presumably comprising mainly dust and other fine debris.

The most prominent feature detected using smaller telescopes was an extension of the coma in position angle 320°. Maui Community College, Hawaii, had also used the Faulkes Telescope North to obtain a couple of images of 29P on June 14, from which it was then possible to measure the rate of motion of the feature moving in p.a. 320°. Extrapolating the motion back in time showed it originated from the nucleus on 2013 June 12.92±0.05, i.e. during the 3-hr time gap between the pre-outburst and post-outburst images in Figure 1. This finding is strong evidence that the constituents making up the expanding coma were accelerated away from the nucleus during a short-lived eruption event.

29P is classed as a Centaur object, in that it occupies a somewhat chaotic orbit a little further from the Sun than Jupiter, and it is this planet which mostly influences its orbital evolution. Almost certainly until recent times 29P was located much further from the Sun, possibly as a trans-Neptunian object (TNO) where volatile constituents remained frozen solid for billions of years. Centaurs tend to comprise objects such as TNOs which initially are perturbed by the gravity of Neptune before being gravitationally ‘handed down’ often in a sequential manner by Uranus, Saturn and finally Jupiter. As such, 29P may have arrived in its present near-circular orbit located some 5.7–6.3 AU from the Sun within the last few thousand years. A close encounter with Jupiter and associated tidal forces may even have been responsible for triggering its recent activity.

We may therefore have an opportunity to study a TNO-like object at relatively close quarters, and yet it seems to have been somewhat overlooked by professional astronomers. Although the Herschel Space Observatory and Spitzer infrared space telescope have imaged 29P, up until recently I was not aware of any observations having been made using the Hubble Space Telescope (HST). That was until Hal Weaver of Johns Hopkins University (JHU), Baltimore, Maryland pointed out on the Yahoo ‘comets-ml’ mailing list that HST was used to observe 29P back in 1996 March. Preliminary results were reported at the American Astronomical Society’s DPS meeting #28 in 1996[1] but no formal paper was subsequently published.

Following correspondence with Hal Weaver and colleague Paul Feldman, also at JHU, I was able to download the relevant HST images from the Hubble Legacy Archive (HLA) website. Paul Feldman indicated that the 1996 observing programme was primarily a spectroscopic investigation and images were taken with the WFPC2 camera for context purposes. The exposures were bracketed (120, 400 and 2´600 sec duration), not knowing what the comet brightness would be. The schedule was arranged weeks in advance and the first exposures began at 07:39 UT on 1996 March 11. By sheer coincidence 29P appears to have outburst some 6–8 hours before this time, attaining an R magnitude of ~12.5, so that the March 11 images taken with HST were saturated at the position of the comet’s nucleus. A second series was taken about 20 hours later by which time the outburst had dissipated somewhat, so that the shortest (120 sec) exposure did not saturate the pixel coincident with the nucleus, as shown in Figure 3(B).

The paper by Feldman et al.[1] interpreted the development of the coma as a gradual process, which they estimated began on March 10 between 4h UT and 13h UT and that dust production was then maintained for ~12 hr before tapering off toward a quiescent production rate. However, some 17 years have passed since this one-and-only observing run of HST, and we now know that almost all of 29P’s coma is generated in sudden outbursts. Also, image analysis software has evolved considerably during the intervening time and I therefore subjected the HST FITS images to the same type of rotational gradient analysis used to produce Figure 2(B), the results of which are depicted in Figure 4.

Similar structures are present within the inner coma of the two images separated in time by 19.5 hr, except that in the later epoch the same structures appear to have expanded linearly by a factor of 4–5. This finding indicates that the initial outburst probably began on [1996] Mar 11 at about 01h UT (±1.5 hr). Notice the many streams of material emanating from the nucleus, especially the two strong flows in roughly north and south directions together with a shielded area eastward of the nucleus: all very reminiscent of 29P’s latest outburst described above.

In preparing this article, I noted that Gary Kronk in his Cometography article about 29P[2] included an image taken by Herman Mikuz from Crni Vrh Observatory, Slovenia on 1996 Mar 10. I therefore contacted Herman who kindly provided me with a copy of his original image (Figure 5). Photometric analysis of the image shows the comet was not at that time in outburst being relatively faint at R= 15.5 (10 arcsec measurement aperture) on 1996 March 10, 22:00 UT, i.e. 3.0 magnitudes fainter than that recorded by HST less than 10 hours later and therefore a very good confirmation of the calculated outburst time reported here. Thanks Herman!

As mentioned earlier, 29P is a favourite target for amateur astronomers worldwide who between them are able to spot the outbursts of this most enigmatic object within a few hours of their taking place. It therefore strikes me as an eminently worthwhile objective to set up a project using the HST to follow up such outbursts via high-resolution imaging. Knowing that time is scheduled on HST would be a great boost for all astronomers with an interest in this particular comet, and by working together we may go a long way to solving the enigma that is Comet 29P/Schwassmann–Wachmann.