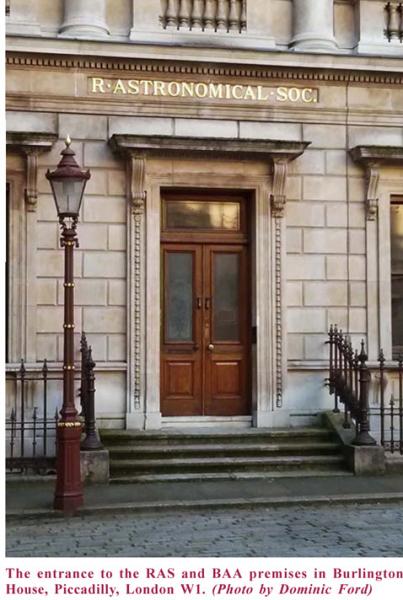 Let us return for a moment to the London of 1942 April, in order to attend a meeting of the Royal Astronomical Society at their premises in Burlington House, Piccadilly.
Arriving at Piccadilly Circus by Underground is not so very different from today. The Piccadilly Line runs deep, and stepping off the train we immediately see the spaces reserved for those who choose to stay there overnight, and indeed some are already taking up their sleeping places at teatime. (History however records that even in the worst part of the War, most Londoners slept at home in their beds.)
Ascending to street level, Piccadilly Circus looks much the same, except that the statue of Eros has been hidden away behind protective shuttering for the duration of the War. Walking west along Piccadilly feels very familiar too, though there has been bomb damage to some of the well-known department stores both here and in Oxford Street and Bond Street. The most obvious casualty has been the unlucky church of St James, burnt out by incendiaries and parachute mines in 1940 November, near the beginning of the London Blitz, but happily restored later.
Deposited in wartime London, the modern traveller might think that every pedestrian has become an amateur astronomer, with binoculars strung round their necks. But closer inspection reveals that these are actually gas masks, and to forget to carry one is an offence. It might be refreshing to see that people actually speak to one another, instead of being obsessed with mobile devices. The much greater prevalence of cigarettes is another difference. There is no escaping them in restaurants, trains or the cinema!
Arriving at the Royal Academy, and crossing the courtyard on the left, we arrive at the RAS apartments. The white tape criss-crossing the windows hides numerous cracks in the glass, caused by heavy explosions in the vicinity. There has been a direct hit on the adjacent Burlington Arcade: far too close for comfort. In the absence of a caretaker, the RAS has taken the precaution of asking Fellows to volunteer for a rota to sleep in its basement shelter: the local ARP Warden will wake them only if the building is in immediate danger, when they will be called to assist with fire-fighting. And out of hours, heavy wooden tables are placed aga 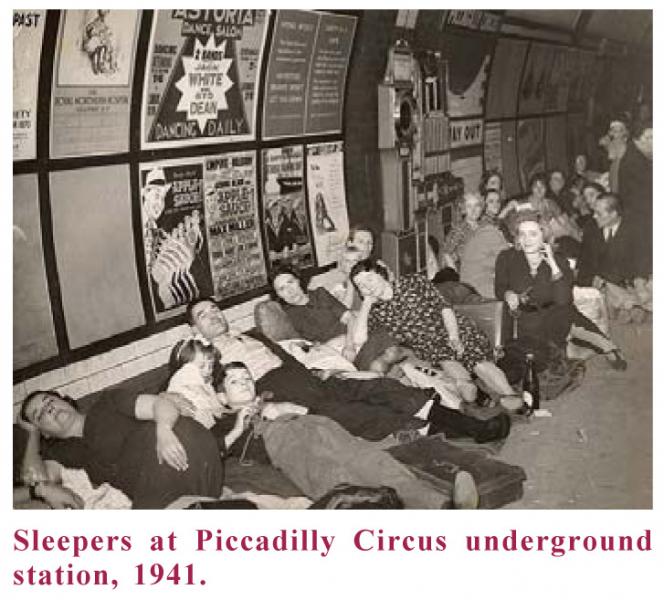 inst the windows of the Library to minimise blast damage. In the event, except for the apartments being occasionally littered with falling plaster and broken glass, the building will survive the War undamaged.
It is Friday April 10, and the RAS is holding its AGM. There is tea in an adjoining room, and then the meeting starts at 4:30 pm. The meeting room is in the same place as today’s, except that it is arranged more conveniently and sensibly in portrait rather than landscape form. Prof Sydney Chapman FRS is the President, and at the start of the meeting he presents the Jackson-Gwilt Award to Dr R. L. Waterfield. His Presidential Address concerns the source of solar energy, and after the Accounts have been dealt with he reports: ‘I have much pleasure in announcing that the Council have recently invited the British Astronomical Association to make this building their home, and that the Council of the Association has accepted the invitation. The arrangement is in the first instance for the duration of the War or for two years, whichever is longer. The Association will have the use of this room and the Council room for their meetings. Their library will be housed in the upper library of this building.
‘It is believed that this degree of use of our premises by the Association will not in any way be detrimental to the interests and convenience of Fellows, and the arrangement will not throw any financial burden on the Society. The individuality and independence of the Association will in no way be affected or limited by this arrangement. Those who have long felt an affection for this building as the home and centre of British astronomy will, I feel sure, rejoice that in future it will have this character even more fully.’
[See The Observatory, No. 807, 64, 217-223 (1942) and Mon. Not. R. Astron. Soc., 102(2), 41-43 (1942). This speech was also printed in our Journal, though the words are slightly different there: J. Brit. Astron. Assoc., 52(3), 119 (1942). Further details were given at the BAA Ordinary Meeting of 1942 April 29.]
The formal invitation from the RAS had been made in 1941 December. Prof Chapman was its chief architect, and it was strongly supported by the Astronomer Royal, Sir Harold Spencer Jones, who had recently served as BAA President (the last AR to do so). The Association moved to Burlington House on 1942 August 31, holding its first meeting there on September 30 [reported in J. Brit. Astron. Assoc., 52(9), 285-295 (1942)]. At this meeting, chaired by the BAA President, F. J. Sellers – a Londoner whose home had itself been damaged in the Blitz – Mrs Evershed spoke about the early homes of the BAA, and other members gave their reminiscences of some of the famous figures from the Association’s history.
Until 1942 the BAA had housed its Library and held its meetings at Sion College on the Thames Embankment, but air raid damage to the college during the 1940-’41 Blitz had made the Association’s continued existence there questionable. There had been a fire in the BAA Library, but the caretaker Mr Brigden had tackled it successfully so that the only casualties were a single book and the carpet, though some more valuable books stored in the basement strong-room were damaged by a burst water main due to a bomb through the roadway, and by water from the hoses that extinguished the firebombs in the Theological Library of the College. (Mem. Brit. Astron. Assoc., 36(2), 129-130 (1948)). Thanks to our Librarian, Mrs Vera Reade, and Assistant Secretary, Miss Lydia Brown, the Library would continue to remain open on Wednesdays. The BAA met at Sion College for the final time on 1942 August 26.
During WW2 there were fewer winter meetings and – to compensate – more summer meetings of both the RAS and the BAA, in order to make the journey home easier by daylight. In the blackout there were no streetlights, and even motor vehicles had to use shaded headlights reduced to slits. Getting home would have been more difficult and even dangerous, but the Association’s meetings carried on throughout, and the long verbatim accounts of them certainly helped to fill the steadily thinning pages of the Journal.
Now let us return to the present. By the end of 2017, the Association had spent 75 years in Burlington House, with one slight interruption. Building work carried out during 2006-’07 made it necessary for both societies to temporarily relocate elsewhere. In fact the BAA found itself new accommodation first, which was large enough for us to invite the RAS to share it. It is ironic that our move in 1942 was partly in order to save the Library, and that we sacrificed most of it in 2007 in order to remain in a much more limited space within that building.
The wartime offer from the RAS was generous, but the BAA has also given much support to the senior Society in return, while many members of the BAA have become RAS Fellows and so have supported it via their subscription income. I wonder where we shall be in another 75 years?