A deep sky gem in the Unicorn

The major winter constellations have a reputation for being bright and striking. Orion, Gemini, Taurus and Canis Major dominate the southern sky during December, inviting telescope and binocular users to explore them. One constellation that certainly isn’t ‘bright and striking’, however, is Monoceros (the Unicorn). Occupying the space between the bright stars Procyon (Canis Minor) and Sirius (Canis Major), its brightest stars are just short of 4th magnitude, making the constellation all but invisible from light polluted urban areas. Perhaps it is appropriate that the rather elusive unicorn should be associated with a rather elusive constellation!

Not surprisingly, because of its faintness, Monoceros was a relatively late addition to night sky charts and seems to have been popularised by Jakob Bartsch in the 17th century. What the Unicorn lacks in bright stars though, it makes up for in clusters and nebulae, ensured by its position within the winter Milky Way. Many of these (Hubble’s Variable Nebula, the Christmas Tree Cluster and the Cone Nebula) have been mentioned in Observers’ Forum before. 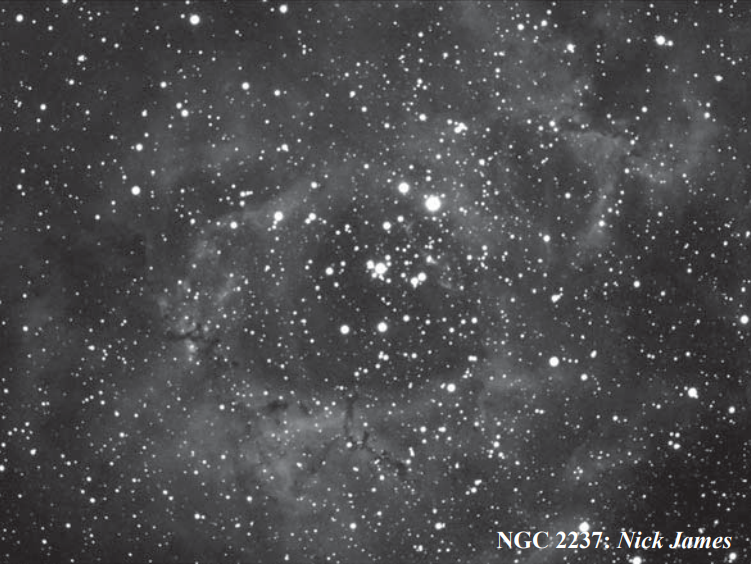 This note concentrates on the Rosette Nebula, a massive complex of dust and gas rather similar to the Orion Nebula, but less dramatic to the visual observer. Because of its faintness, it was discovered in stages by different observers in the mid-19th century, who lacked the modern short-focus/wide-field telescopes and nebula filters which would have allowed them to glimpse that the individual emission nebulae were all part of the same vast gas-and-dust complex. So, when Dreyer compiled the New General Catalogue (NGC) in 1888 – his catalogue of all the then known deep sky objects – the Rosette was given several NGC numbers. Today it is usually referred to as NGC 2237, but 2237 – as already implied – is only one part of the Rosette, discovered by Lewis Swift in 1865. Albert Marth had already discovered the component now referred to as NGC 2238 in 1864, and Swift again discovered another portion, NGC 2246, in 1886. Parts of the nebula were also later discovered independently by the eagle-eyed Edward Barnard in the USA.

The bright star cluster associated with the Rosette is NGC 2244, which was first observed by Flamsteed in 1680, although some references give William Herschel as the discoverer in 1784. 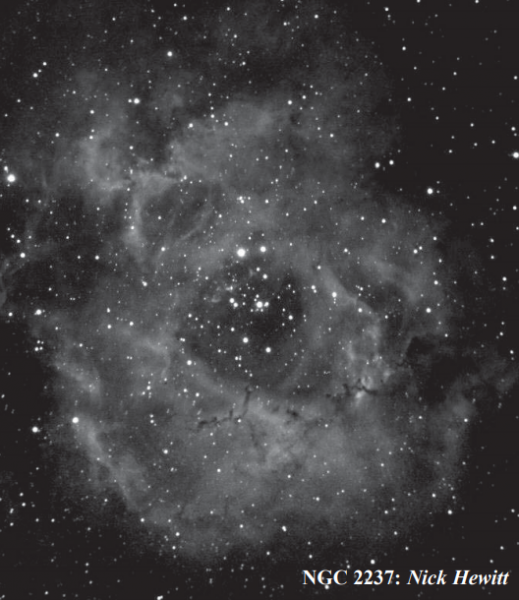 The Rosette Nebula is large – covering over 1° of sky – with an estimated true diameter of around 90 light years and lying at a distance of some 4,900 light years. Although it is never going to be a ‘show your neighbour’ type of object, under the right conditions it can be almost easy. As with any faint object, transparent skies and a total absence of light pollution are essential if you are to stand any chance of seeing it.

Observing from around 2,000m altitude on Tenerife in 2005 (under excellent sky conditions) the writer thought the nebula looked almost three-dimensional in a 24″ [61cm] telescope fitted with a 31mm Nagler eyepiece and OIII filter. In fact the extent of the visible nebulosity was too large to fit the eyepiece field. Many faint and large objects can often be easier to see in binoculars than with a telescope (e.g. the galaxy M33 in Triangulum) and on this night the Rosette was also very easy in a 15×70 pair – but not naked eye as some claim it can be.

The advent of CCD cameras and narrow-band filters has allowed objects that only a few years ago would have been regarded as impossible for urban astronomers to observe, to become almost common-place targets. Some images of the Rosette received by the Deep Sky Section are shown here.

Nick James imaged the nebula from his garden site in Chelmsford, using a Williams Optics Megrez 72 refractor and Starlight Xpress SXV-H9 camera, fitted with a Lumicon deep sky filter. The exposure was 10×180s and the field of view 71×53arcmin. South is ‘up’ and west to the left. This image shows very well how early visual observers, with instruments showing only small fields of view, must have had trouble connecting the individual areas of faint nebulosity to one large, single structure.

Nick Hewitt’s image of the Rosette, also shown here, was taken through a 66mm f/5.9 William Optics refractor fitted with an Halpha filter from his Northampton garden site. The exposure was 2×900s. Conditions were described as transparent but chilly, with scudding cloud and sleet flurries. The field of view is 81×60arcmin. South is ‘up’ and west to the right. 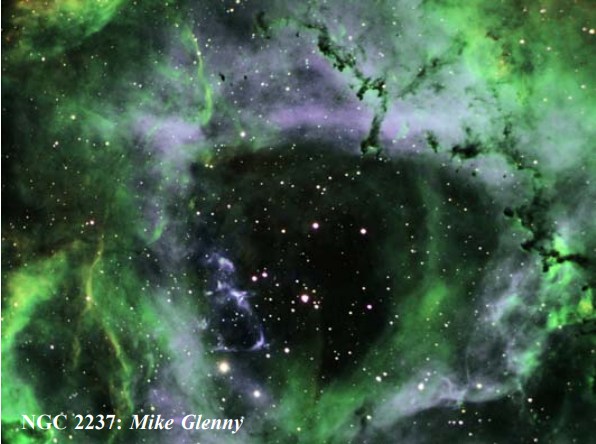 Also shown is the central region of the nebula, captured by Mike Glenny using his Meade 8″ LX90 telescope and QSI 683 camera fitted with 5nm Hα, 3nm SII and 3nm OIII filters. The exposures were 13×600s Hα, 10×600s OIII and 10×600s SII. The image was processed in DeepSkyStacker and Photoshop: north is ‘up’ and west to the right. The dark ‘ropes’ visible in this image are the likely source of material for the creation of new stars in the nebula – the same process as is seen in the Trapezium of Orion. Because the image was obtained through various narrow-band filters, the central cluster shows fewer stars than are visible in some of the other images.

Visually of course, although the nebulosity may be difficult under less than perfect conditions, the central cluster at magnitude +4.8 is an easy target (RA 06h 32.4m and Dec +04° 52′). It is the hot, O–type stars of this cluster that are ionising and illuminating the nebula. The radiation pressure from them has cleared away the dust and gas, allowing the stars themselves to be seen. It is surprising that Messier and his comet hunting colleagues missed this cluster as they did observe and catalogue M50 (NGC 2323), which lies some 13° further south and is over a magnitude fainter. 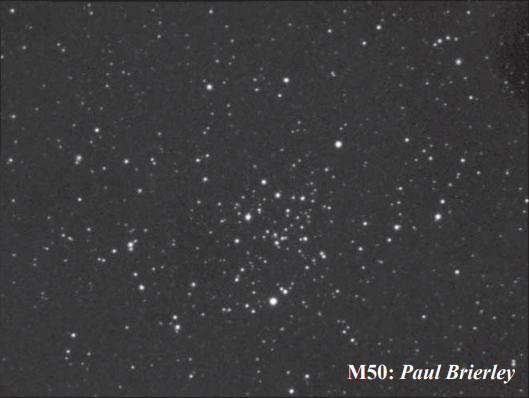 Messier noted M50 in 1772, although the cluster had almost certainly been observed by Giovanni Cassini many years previously. It is a fine open cluster target for both imagers and visual observers alike. The photograph shown here was obtained by Paul Brierley from Macclesfield. It was shot through a Williams Optics ZS66SD refractor, Atik 16IC camera and Astronomic CLS filter combination; the exposure time was seven minutes. Paul commented that although the seeing was excellent, the heavy dew and low altitude of the cluster made imaging very difficult.

If you observe any of the deep sky sights in Monoceros – and there are many – do send your observations to the Deep Sky Section, and share them on the Members’ Page of the BAA website.