A lunar cryptomare dome near Cavalerius A and Hevelius A 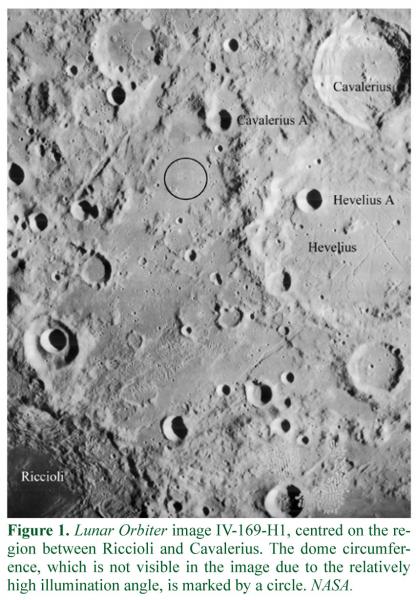 Hidden mafic deposits, termed ‘cryptomaria’, have long been known to be of great importance to lunar studies because they provide evidence of ancient volcanism [refs 1–6]. Mafic rocks are igneous, dominated principally by the silicates pyroxene and (in some cases) olivine. These minerals are high in magnesium and ferric oxides and their presence gives mafic rock its characteristic dark colour. Basalt is a common example of mafic rock.

Because of their hidden nature, the identification of cryptomare deposits relies on indirect methods, such as the presence of Dark-Haloed Impact Craters (DHICs) which excavate the underlying mafic material. In general, cryptomaria are defined as lunar volcanic deposits that are obscured by crater and basin impact ejecta. Criteria for the identification and classification of cryptomare deposits have been presented by Antonenko et al. [7,8]

A previous study suggests that basaltic volcanism may pre-date the last major impact basins and that at least some lunar light plains may be early volcanic deposits, which were subsequently buried by varying thicknesses of impact ejecta.[2] Other studies suggest that Orientale ejecta correspond to the cryptomafic-obscuring light plains unit in the crater Schickard.[9,10] Two post-Orientale mare patches embaying the light plains unit are found within Schickard, indicating that extrusive volcanism also occurred at a later date in this region. In previous research, a lunar dome, named Mee 1, was identified near the craters Mee H and Drebbel F in a region showing evidence of ancient (pre-Orientale) mare volcanism and cryptomare deposits.[11]

The largest expanses of cryptomare are correlated with Imbrian-aged light plains deposits and other highland units, thought to have been emplaced as a result of the Orientale impact event, which occurred soon after formation of the Imbrium basin 3.85 billion years ago (Giga-annum, Ga).[10] Just north of Grimaldi lies the 106km crater Hevelius, near the younger, Eratosthenian-age crater Cavalerius. Hevelius is a Floor Fracture Crater (FFC) with significant central uplift indicating subsurface magmatic intrusion. The floor of Hevelius has been flooded by lava and is crossed by a system of rilles named Rimae Hevelius. Beyond Hevelius, other rilles and linear crater chains are radial to Orientale Basin.[12]

In this study we describe a domical structure located near the craters Cavalerius A and Hevelius A. It lies in a complex area, mapped as Hevelius Formation in the United States Geological Survey (USGS) map I-823 and described in literature.[12]  Figure 1 displays the Lunar Orbiter image IV-169-H1, where the area of the dome is marked by a circle. The region around the dome is characterised by lineations and secondary crater chains running radially with respect to the Orientale basin, presumably formed by material ejected during the Orientale impact event. Figures 1 and 3 show a flow-front-type feature trending SW–NE just to the NW of the suspected dome, which was likely buried by Orientale ejecta.

Based on high-resolution telescopic CCD observation, carried out under oblique conditions of illumination, we explore the region around the domical structure. We examine the morphometric characteristics of this dome – herein referred to as Cav 1 – by making use of combined photoclinometry and a shape-from-shading approach, using high-resolution telescopic CCD imagery of the region… (continued…)