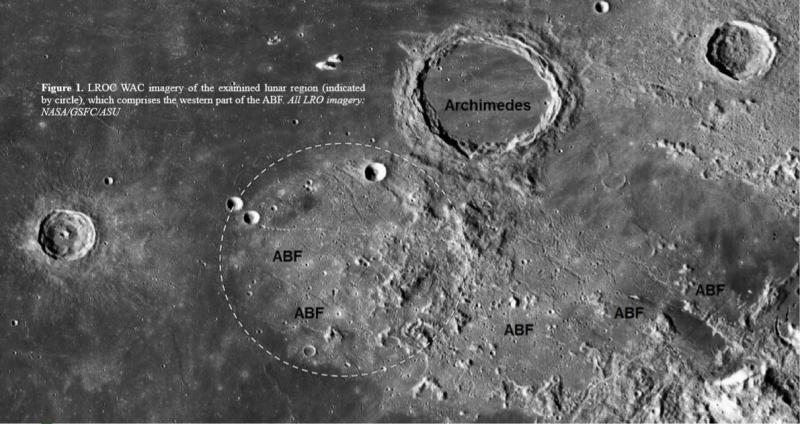 Archimedes is a well-known 81km-diameter crater which is situated north-west of the Apennine Bench Formation (ABF), near the eastern border of Mare Imbrium. Archimedes has no rays and its floor is flooded by mare lava. The stratigraphy of this area has been extensively studied;1,2 it is known that the impact which created Archimedes occurred after the formation of the Imbrium Basin (3.9–3.8 billion years ago), but before the flooding of the basin by dark mare lavas (3.84–3.1 billion years ago). 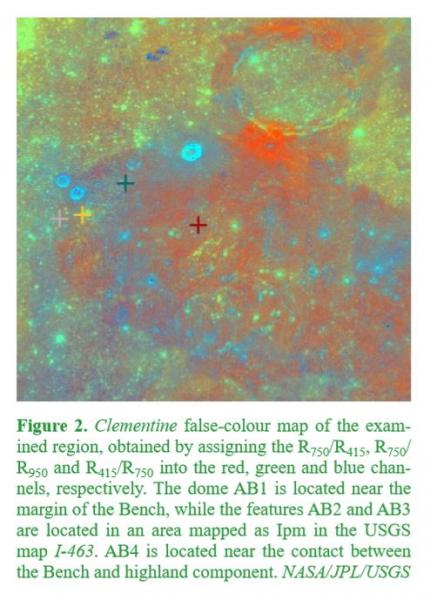 The lighter lava plain of the ABF is older than Archimedes and was formed by pre-mare highlands-group volcanism.3 These plains are notable for their roughness and tectonic features (graben), as visible in Figure 1. A volcanic origin for the ABF is suggested by the presence of domes on the bench and the finding of appropriate types of volcanic rock in the Apollo 15 specimen collection.3–4 More recent lava flows in the Imbrium Basin are much darker, covering most of the Apennine Bench lavas and many of the inner rings of the Imbrium Basin.

Dark pyroclastic deposits can be found just to the south-west of the Archimedes crater. The most prominent area involves the south rim, which appears darker (lower albedo) due to absorption at 415nm. This region has been described to be very low in titanium content.5 The optical maturity (OMAT) map of the crater shows low OMAT values for the southern rim and this has been interpreted as being consistent with pyroclastic debris.6 The ‘redness’ of the rim deposits is well visualised in the Clementine colour ratio imagery (Figure 2), where yellow-to-orange mare areas are composed of basalt with a high iron but low titanium content, while bluish mare areas are composed of basalt with both a high iron and titanium content. The rim deposits in Figure 2 display a scarlet colour.

A general overview of the region herewith studied has been presented and discussed by Spudis (1978),3 including a map of the regional context. The largest areal extension of the ABF occurs south of Archimedes and deposits of this crater have altered the primary surface textures of the region. The more recent Copernican craters Aristillus and Autolycus have excavated ABF materials, degrading the original surface morphology of the plains.3 Different lithological units have been mapped in the US Geological Survey (USGS) lunar geologic map I-463 as distinct units: Ipm through Iab.1 Ipm units denote mare material, while the ABF is described as Iab, corresponding to ‘mare material similar to Ipm but older and more cratered’ than the nearby Ipm mare units.1

The composition of the ABF, as determined from remote sensing data, is that of medium-K Fra Mauro (KREEP) basalts and is chemically distinct from Imbrium impact melt, which has low-K Fra Mauro basalt composition.3 The ABF is the only known large surface expression of rocks with a KREEP basalt composition.1–3 Thus, improved knowledge of the ABF is important to our understanding of volcanic processes on the Moon.

In this paper we describe the results of a survey carried out on the examined region shown in Figure 1, which in principle can be considered as a megadome, in order to characterise volcanic features and domes. The high spatial resolution (~0.5 metres-per-pixel, m/px) of the Lunar Reconnaissance Orbiter Camera (LROC) system allows for small volcanic features to be located. We have characterised additional volcanic features (termed AB1–4). Thus, we examine the morphometric and spectral characteristics of the examined features (Table 1) and derive information about the physical parameters of their formation, providing a geological interpretation of our morphometric, morphological and spectral data.

The origin of the ABF has been the subject of considerable speculation with early interpretations being basin ejecta and impact melt, based on comparisons with the Maunder Formation of Mare Orientale.35 Indeed, the terrain to the east of Rima Bradley and to the west of Montes Apenninus shows strong morphological similarities to the Maunder Formation and has been interpreted as probable Imbrium Basin ejecta and impact melt.

This basin ejecta view was largely superseded by a volcanic interpretation, based firstly on morphological and then both morphological and geochemical criteria in the post-Apollo era. Samples recovered by the Apollo 15 astronauts were interpreted as being representative of the medium-K Fra Mauro, which remote sensing data indicate forms the ABF.3 This reinterpretation placed the ABF in the unique position of being one of the largest non-mare areas of volcanism known, post-dating the Imbrium event by a ‘mere’ 200 million years. Chronologically therefore this volcanism post-dates any deposits which are analogous to the Maunder Formation, which was essentially emplaced during the Imbrium event. What has been lacking is definitive identification of volcanic structures within the ABF, a deficiency addressed in the following analysis.