A plaque to B.M. Peek at the Simon Langton School 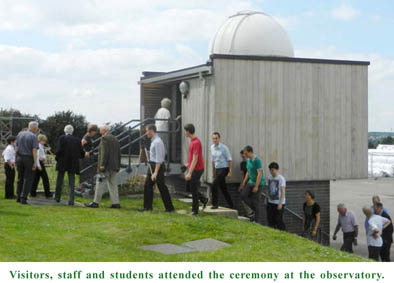 Bertrand Meigh Peek was one of the most well-known Directors of the BAA Jupiter Section (from 1934 to 1949) and one of the most respected early authorities on Jupiter. Professionally he was a schoolteacher and spent most of his career at Solihull Grammar School. However, in 1947 he moved to the Simon Langton Boys’ School at Canterbury, where he taught mathematics, and also founded the school’s astronomy club. The school now has a flourishing Star Centre, and this year the school decided to mount a plaque in honour of Peek in the observatory at the school.
The plaque and its unveiling on 2014 July 15 were organised by Richard Bailey, who had been one of Peek’s pupils; Chris Boucher, former teacher; Pauline Walters, former teacher and now a governor of the school; and Becky Parker, teacher, and director of the Langton Star Centre.
The event was attended on behalf of the BAA by Dr John Rogers, present Director of the Jupiter Section, who was invited to unveil the plaque. The event was attended by about 24 people from the school, including some current students who talked about their astronomical activities, and four ‘old boys’ who had been taught by Peek. To show the company the extent of 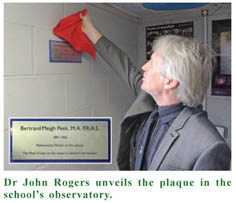 Peek’s work on the giant planet, John Rogers brought a selection of Peek’s notebooks, drawings and charts, and the Jupiter Section’s copy of his famous book The Planet Jupiter given by Peek himself.
Richard Bailey and local historian David Lewis had uncovered much about Peek’s non-astronomical life. Born in 1891 in Boscombe, Bournemouth, he excelled in mathematics at Cambridge, and was an enthusiast for chess and sailing as well as for astronomy. After the First World War (where he served in India, attaining the rank of Major), he entered the teaching profession, eventually becoming headmaster of the Junior Section of Solihull Grammar School.
It is not known why he moved from Solihull to Canterbury, but he may have wished to reduce his responsibilities and to return to the south coast, as he was to give up the Directorship of the Jupiter Section in 1949 due to declining health. He lived in Herne Bay where he was a keen member of the local Sailing Club. He retired from the school in 1955. In 1965, he went to Australia to visit his son, who was a Major in the Australian army. He died during that visit, aged 73; according to David Lewis, a meeting of the Melbourne Astronomical Society was held around Peek’s hospital bed shortly before he died.
Those whom he had taught at Simon Langton School remembered him as a classic gentleman and a calm, kind and straightforward teacher, although one who could easily be distracted from his maths lessons to talk instead about navigating his yacht. ‘Old boys’ remembered that like most teachers in those days he habitually smoked a pipe, and wore a memorably aged gown, a visible reminder of wartime shortages and of its occasional use to clear chalk from the blackboard. Peek founded the school’s astronomy club in 1948, although at the time they had no telescope, and just observed the (then-dark) sky with the naked eye and binoculars.
The school’s observatory is now equipped with a 368mm Meade telescope and is soon to be enabled for remote operation and imaging. The students are also reconstructing a surplus 3-metre radio telescope, and had designed and built a novel cosmic ray detector called LUCID which was launched into orbit by a Soyuz rocket a few days earlier aboard TechDemoSat-1, a shared technology demonstration satellite of the UK Space Agency. So Peek’s old school is still keeping up with modern methods of astronomical observation.
More about Peek’s life can be found in his obituary in the Journal, vol.76(4), p.295 (1966).
John Rogers